New study on resident duty hours: can they see and learn enough under the current restrictions? 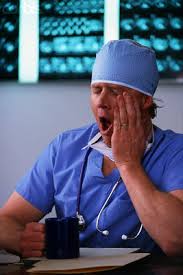 A newly minted physician, one who has just graduated from medical school, is not yet ready (or licensed) to practice medicine. The next phase in medical training is called residency — a 3 to 5 year span of time during which the new doctor is given teaching, supervision, and increasingly allowed to function independently in his or her chosen specialty.

Since 2003 residents have been limited to working 80 hours per week, averaged over 4 weeks, with no individual stretch being longer than 16 hours. The rationale for this time restriction is reasonable and difficult to argue with: it dates back to the famous Libby Zion case. She died, and analysis of the case implicated resident fatigue and lack of supervision as contributing significantly to her death. The tragedy focused attention on the ways that overworked, overtired, and poorly supervised residents can harm patients. We don’t want that. But we don’t know the right balance between the patient care service residents provide and their education.

There is no doubt that for many years residents put in too many long hours — well over 100 per week was common. I did that when I trained in the late 1970s. The first year, long called the internship year, was the most brutal. In my case that amounted to at least 120 hours per week, often longer. We got every third Sunday afternoon off — if it was quiet. Subsequent years were less onerous, but always were 100 hours or more.

There is also no doubt that medicine is a career you learn by doing, so sitting in a lecture hall until you see your first patient as a physician is not the way to train doctors, although it was once done that way a century ago in the era before the Flexner Report. Have we found the right balance among the competing claims of resident education, practical on-the-job experience, and patient safety? A recent review article from the  Annals of Surgery,  “A systematic review of the affects [sic] of resident duty hour restrictions in surgery: impact on resident wellness, training, and patient outcomes,” gives us some useful information about the question. It is particularly useful because surgery residents must have more than abstract cognitive skills; they also need quick and decisive decision making skills and physical dexterity, which they can only get through practice. The American College of Surgeons has been particularly concerned about the effect reduced duty hours has on resident skills.

The review linked above is what is called a meta-analysis. This is a technique in which many smaller studies are pooled together to yield a larger data set, in this case a total of 135 separate articles. The results were disconcerting for advocates of duty hours restrictions. First, there was no improvement in patient safety. In fact, some studies suggested worse patient outcomes. Resident formal education may well have suffered; in 48% of the studies resident performance on standardized tests of their fund of knowledge declined, with 41% reporting no change. Importantly, only 4% reported improved resident performance. Resident well-being is difficult to measure, but there are some survey tools that assess burn-out; 57% of the studies that examined this showed improved resident wellness and 43% showed no change. So the bottom line is that, for surgical residents, duty hour restrictions were associated with better rested residents doing no better, and often worse, on assessments of their knowledge base. Patient safety, a key goal of the new rules, did not improve and actually may have been worse.

What are we to make of this? I can understand how resident test performance suffered. It suggests to me that most learning takes place at the patient bedside or in the operating room. In this analysis the additional free time for independent study didn’t help, either because residents didn’t do it or it’s not as effective. But what about patient safety? Why did that actually go down in more than a few of the studies?

One reason my be the problem of hand-offs of care. When duty shifts of residents are shorter they need to hand-off care of their patients to someone else. It’s well known that these are potentially risky times since the resident assuming care probably doesn’t know the patient as well. Under the old system, I often would admit a sick patient and stay caring for that patient for 24-36 hours. When that happens you really get to know the details of your patients well. From an educational perspective, you also see the natural history of an illness as it evolves. Finally, you develop a closer relationship with patients and their families than happens if residents are continually coming and going.

For myself, I am conflicted over how well we are doing training residents under the new rules. I don’t want to be like an old fart sitting on the porch and yelling at the neighborhood kids to get off my lawn. The old days were not necessarily the Good Old Days. The system I trained under was brutal to residents and sometimes dangerous to patients. But it also crammed an immense amount of practical experience into the available time. Today’s residents are denied that experience, and it shows. I am occasionally astonished by encounters with senior residents who have seen only a couple of cases in their lives of several not uncommon serious ailments.

What can we do? Some medical educators think that new advances in computer simulations and the like will substitute for lack of encounters with the real thing. Procedural specialties like surgery are particularly interested in simulations. We use them in pediatric critical care as well, and they help.

The bottom line is that the duration of residency has not changed in half a century or more, yet we are demanding that residents know more and more. Then we shorten their effective training time by duty hour restrictions; for some specialties it’s the equivalent of lopping a year off the residency. From what I have seen in my young colleagues, the practical result is that the first year or two of independent practice amounts to finishing the residency, acquiring the needed experience. Perhaps we should be honest about that and have the first couple post-residency years of being a “real doctor” be structured as getting mentorship from an experienced physician. As things stand, I think a fair number of finishing residents aren’t quite — almost, but not quite — ready to have the training wheels taken off their bikes.