About all those kids on anti-reflux medications: what’s the best practice evidence?

Gastroesophageal reflux (GERD) is when stomach contents slosh backwards from the stomach up into the esophagus, the swallowing tube that runs from the mouth to the stomach. The spot where the esophagus enters the stomach is called, unsurprisingly, the gastroesphageal junction. At the junction there is a kind of one-way valve, called the lower esophageal sphincter. Its job is to allow through what we swallow and keep stomach contents from going back up the wrong way. It has to be a pretty smart valve, because there are times when we want stomach contents to be able to go backwards — when we vomit, for example.

The lining of the esophagus is also different from that of the stomach. The stomach lining cells secrete hydrochloric acid, which helps digest our food. If the acid stays in the stomach, it causes no harm and does some good; but if the stomach contents go up the wrong way, the acid burns the lower reaches of the esophagus. Hence the other common term for GERD — acid reflux disease. Occasional GERD we call heartburn. Long-term GERD can cause serious problems. Here’s what the system looks like: 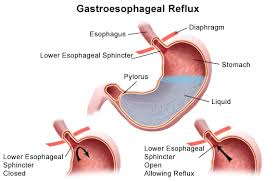 We have several ways to treat GERD. The most common is to use drugs to block acid production in the stomach. This doesn’t stop the reflux, but it treats the pain and inflammation caused by stomach acid. We have two main categories of drugs to do that: so-called H2 blockers, which indirectly reduce acid production; and the more powerful proton pump inhibitors, which directly block acid secretion. The most commonly used H2 blocker is ranitidine (Zantac); common proton pump inhibitors are omeprazole (Prilosec) and lansoprazole (Prevacid). When they first came out these drugs were prescription only, but now you can get them over-the-counter at least in pill form. (Making them into a liquid for small children often requires a pharmacist.) Severe GERD can be treated with surgery to snug up the lower esophageal sphincter. This is called a Nissen fundoplication.

Anti-acid drugs are very commonly used. If you are a parent with a child under one year of age, he may be on (or have been on) one of these drugs. If not, if you poll your friends you will find many children taking them. Is that a good thing? What do we know about reflux in children?

To help answer these questions you can look at a recent policy statement from the American Academy of Pediatrics called, “Gastroesophageal Reflux: Management Guidance for the Pediatrician.” Most of the article is behind a paywall and it’s a bit heavy going for nonphysicians, but it has some useful summary concepts. The biggest take-home is that many, even most infants reflux from time to time. Any parent, especially one with several children, knows that babies spit up a lot. They’re not vomiting — that’s reflux.

These are all pretty common sense things. Yet I see quite a few children who are on anti-acid medications simply for spitting up a lot. The spitting up is normal for many children, and it will improve with age.