Firearms now cause 15% of all pediatric deaths. Why is that?

Children are relatively healthy overall. Although 25% of the American population is under the age of 19, only 2% of annual deaths occur in this age group. There was a time when the contributions of diseases to pediatric death rates were much higher. Declines in deaths from infectious disease or cancer, the result of early diagnosis, vaccinations, antibiotics, and medical and surgical treatment, have given way to increases in deaths from injury-related causes, including motor vehicle crashes, firearm injuries, and the emerging problem of opioid overdoses. A recent study in the New England Journal of Medicine presented some highly disturbing statistics about how out of control are injuries to children from guns in America: in 2016, the latest year for which there are complete data, firearms caused 15% of all deaths in children 1 to 19 years of age — over 3,000 in total. Only motor vehicle accidents, at 20%, accounted for more. Cancer was the third leading cause, at 9%. Guns kill more children than cancer and heart disease combined.

The nature of gunshot deaths differed between adults and children. For adults, 62% of gunshot deaths were from suicides, 37% from homicides, and less than 2% from accidental causes. In contrast, among children 35% were suicides, 59% homicides, and 4% accidental. Think about that for a moment; nearly two-thirds of pediatric gunshot deaths in 2016 were homicides. The study doesn’t provide data on the deeper question this statistic begs an answer for: Who shot these children and why — were they deliberate murders or were many of the children simply caught in the crossfire of American gun violence? Not surprisingly, the proportion of accidental gunshot deaths in children was higher than it was in adults. We live in a country with more guns than people, and the news is full of accounts of small children finding loaded guns and accidentally shooting themselves or another child.

It’s also a well known fact having a gun in the house substantially increases the risk of a gunshot suicide. Adults are more likely to do this than adolescents, but note that a third of pediatric gunshot deaths were suicides; these cases are in adolescents with uncontrolled depression. Any mental health expert will tell you ready access to a violent weapon increases the likelihood a susceptible person will use it for self harm. Adolescents are immature reasoners and having a gun available is a risk.

Diving a little deeper into the data shows that, for children ages 1-4, drowning and motor vehicle accidents were common causes of fatal injuries. School age children, pre-adolescents, had the lowest death rates and for them cancer was the leading cause overall. It was among adolescents that firearm injuries became the most common, particularly suicides.

The paper offers some interesting and useful data about geographic distribution of the most common causes of pediatric deaths, dividing location into rural, suburban, and urban. Those data are shown in this graph: 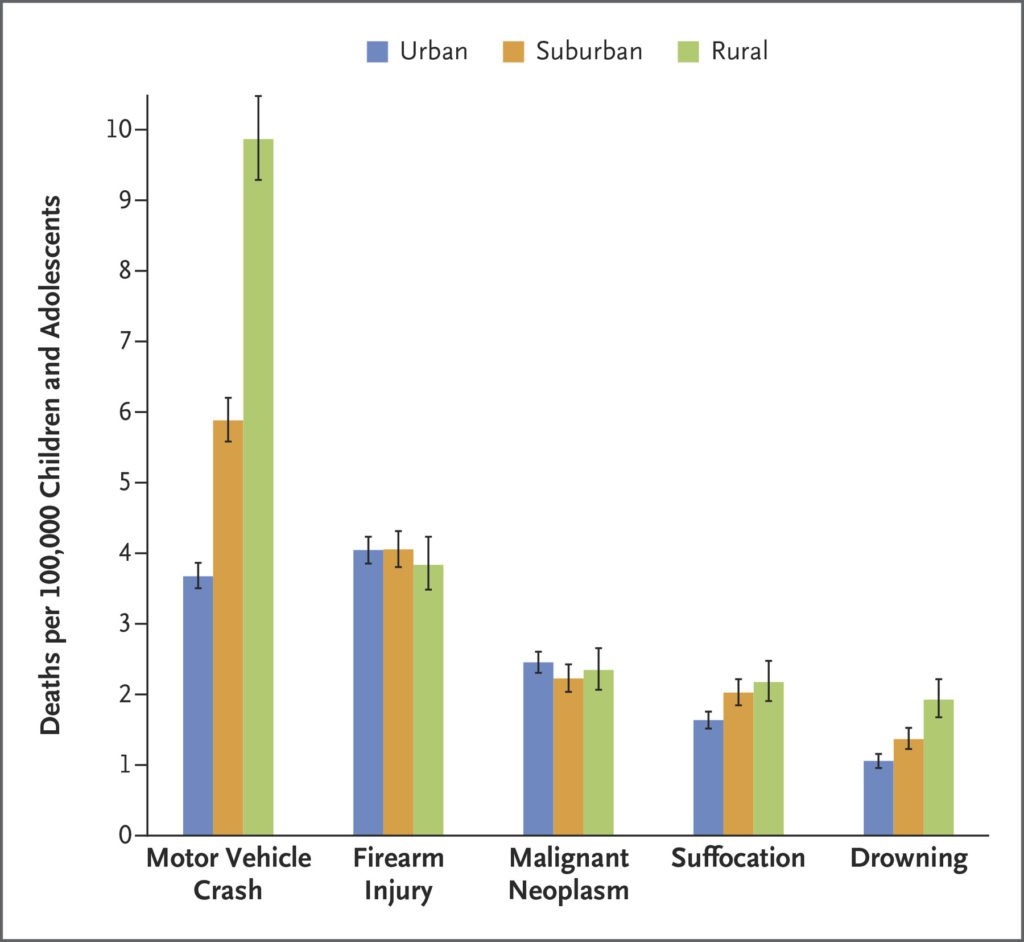 An interesting observation is that rate of firearms deaths showed no geographic variability, unlike motor vehicle accidents. Even corrected for miles driven the increased death risk for rural children persisted. The authors speculated this could be related to longer response times of emergency services in rural areas and perhaps a few other things, such as less use of restraints. The overall risk for firearm death, though, was uniform between urban and rural children. Yet there were some differences within this classification. Urban children killed by guns were over twice as likely to be victims of homicide, whereas rural children were more likely to have committed suicide. There are many other useful comparisons worth your time reading, such as regarding gender, ethnic identification, and socioeconomic status.

I find this study to be quite disturbing, but it confirms what I’ve been sensing both from the news and from what pediatric intensivists are seeing in the PICU. There was an accompanying editorial to the research article that summarized things nicely. It began by pointing out the sad fact American children are 57% more likely to die by the age of 19 than children in any other developed country. I was unaware of that disparity. The author highlighted the role guns play in this difference; in other developed countries firearm injuries cause only a tiny number of pediatric deaths, orders of magnitude less than in America, land of many guns. He ends his editorial with a poignant plea:

“We are living in a divisive era in which there are few areas of consensus and agreement. Perhaps one of the few core beliefs that all can agree on is that deaths in childhood and adolescence are tragedies that we must find ways to prevent. Shouldn’t a child in the United States have the same chance to grow up as a child in Germany or Spain or Canada? We ought to be able to agree that in a country with America’s wealth and resources, children should have the opportunity to live, play, and grow to become adults.”

Yes. American children should have that opportunity.