Some random thoughts on the evolution of the stethoscope: from vital tool to symbolic regalia 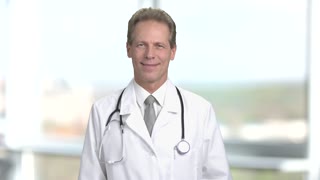 The stethoscope. Nothings says “I’m a doctor” more than the stethoscope in a pocket or draped around the neck. Forty-five years ago when I got my first one, a gift from my physician-father, the former was more common. Then we were more likely to wear coats — white coats or suit coats — and pockets were available. I had suit coats in which the lining was worn out from the weight of the thing and at the Mayo Clinic back then, perhaps still, the sartorial police didn’t allow white coats. Of course medicine was overwhelmingly male then so suit coats were the norm. These days you’re much more likely to see them draped around the neck like the guy in the picture above. Back then we did put them around our necks sometimes, but that required that the springy metal arms to be around your neck, like this guy. 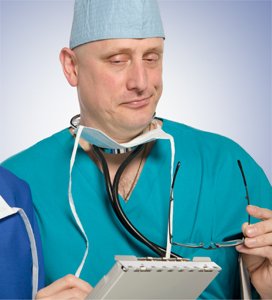 I found that tended to give me a headache because I think it partly occluded blood flow down the jugular veins in my neck. Interesting to me is the newer fashion statement of draping it around the neck like picture #1 is made possible because the tubing on today’s stethoscopes is much longer. The longer tubing also makes wearing it like the guy in image #2 cumbersome because the end of it bangs on your belt rather than the middle of your chest.

Materials of course have evolved as well. My first one was made of steel with rubber tubing; today’s versions are mostly lightweight plastic. Mine was one of the style called Rappaport-Sprague, named after its inventors, I assume. The very best model was sold by Hewlett-Packard, which, alas, no longer makes it. I wish I could get one again because the one my father gave me was stolen from the hospital doctors’ lounge by some evil weasel. I saw the one pictured below offered on E-Bay for $900.00, so I guess other folks share my nostalgia. It looks just like the one I had. I have to say I think the old rubber tubing gave much better sound transmission than today’s plastic stuff. 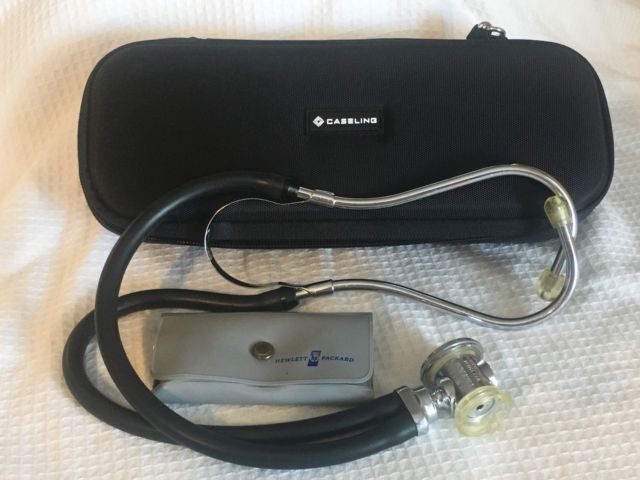 Notice the shorter tubing. If you draped the tubing of one of the older versions around your neck the thing could fall to the floor when you moved if you weren’t careful. In contrast, the newer Rappaport-Sprague style on the guy in image #2 has long tubing made for neck draping. The plastic tubing versions made 50 years ago, and there were those, also had shorter tubing; now they are much longer, like the one sported by the guy in image #1. So let’s focus on the interesting matter of tubing length, because I think it tells us something about the sociology of medicine. It requires we consider for a moment the origin of the stethoscope and conventions of how physicians examined patients.

Until late in the 19th century it was common for physicians not to examine patients at all. They would often render a diagnosis based on the patient’s story. The notion of how useful is touching, examining the patient came with the growth of scientific medicine, as well as some changes in social conventions. The stethoscope as a tool to listen to the internal organs was invented by Laennec, who devised a wooden tube like the one below. The traditional story is that he first used a tube made of rolled paper, purportedly because the patient was a women and it was ungentlemanly for him to touch her or place his ear to her chest. 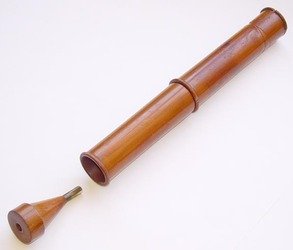 My first stethoscope with its shorter tubing made auscultation a more intimate act than today’s version; you had to lean closer in to the patient. I think that’s a socially signifiant difference. Some might say the longer tubing is there because it makes taking the blood pressure easier, but I don’t buy that. For one thing, blood pressure measurement works just fine with shorter tubing. For another, these days blood pressure is generally taken with an automatic machine rather than manually. In a real sense we’re now more distant from our patients.

The stethoscope itself is becoming less and less used in practice. I still find it very useful in the PICU every day, but it’s not unusual to find on daily rounds that a student or resident hasn’t used one in their daily examination of a patient. I think one thing that keeps it going is not so much its function as a tool but rather as a key part of a physician’s regalia, a badge that proclaims status. Just look at all the stock internet images of people posing with one prominently displayed. But like the white coat that once indicated physician status, but now is worn by everyone, you’ll find a stethoscopes hanging on necks everywhere. What I see now is an interesting sort of countertrend; many senior physicians no longer carry one. When they want one they just borrow one from the dozens available around the PICU.

You can read another take on these trends in this essay from The Guardian. It points out how several aspects of medical practice we take for granted, including the use of the stethoscope, were fostered by the social changes of the French Revolution. I recommend it.