Recognizing sexism in medicine: and, by the way, do women physicians provide overall better care?

The recent prominence of the MeToo movement has shined a light at many places in our society where insidious or even obvious sexism against women has long gone unremarked. Even when noticed it’s just shrugged off as the way things are. In honor of this MeToo was named Person of the Year for 2017 by Time Magazine. Medicine is no exception to this pervasive problem. A very interesting recent essay in the New England Journal of Medicine examines why this is and what we could do about it.

It’s well documented women are vastly underrepresented in leadership positions in medicine, such as full professors and department heads. This is in spite of the fact the proportion of women to men in medical schools is roughly equal and has now been so for over 15 years. Last year the number of women admitted to medical school even slightly outnumbered men. This graph shows the trends over the last 50 years. 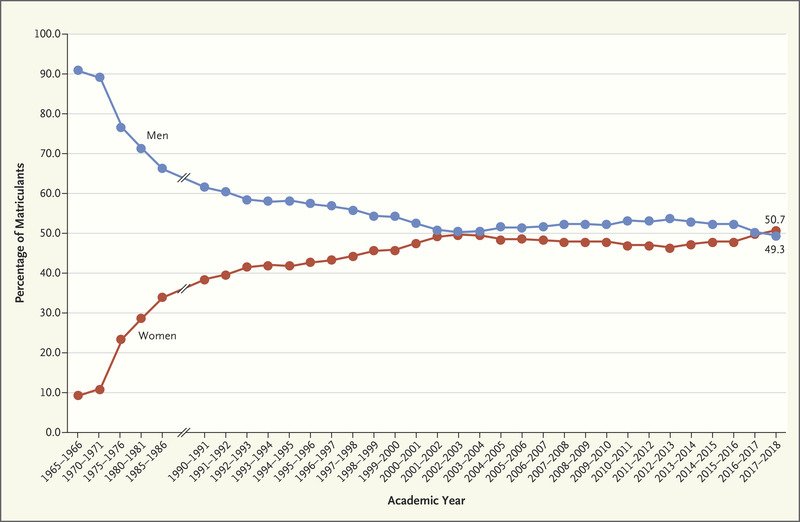 In spite of the steadily increasing proportion of women in medicine the culture of medicine has not caught up. Certainly one can postulate the number of women in leadership positions will increase because typically these positions are held by physicians at mid-career or older; it may take time to generate women physicians with sufficient quantities of grey hair. But I’m not so sure about that. Note from the graph the number of women has been close to that of men for nearly 2 decades. My own field of pediatrics has been at least equal in the proportion of men to women for decades, and for the last decade or so the number of women pediatricians has actually been larger than men. So if it were just a matter of time in rank women should have caught up, at least in pediatrics. Yet this hasn’t really happened. Why is this? One thing observers point to is that women are more likely to interrupt their careers for child-bearing and other family reasons. At least in academic medicine such pauses in one’s medical career can be huge set-backs. My answer to that is, so what? Change expectations of what an academic medical career means. That would actually be a good thing. Along with the author of the essay, I think the answer clearly runs deeper; women physicians are simply not respected to the same degree as are their male colleagues, not by the medical system and apparently not by the public. That’s how deeply the sexism is ingrained. The essayist offers an example of this phenomenon.

A recent study of speaker introductions at internal medicine grand rounds revealed that even when women are acknowledged as physicians, they are more likely than men to be introduced informally: women were referred to by their professional titles 49% of the time, as compared with 72% for male speakers. This finding has important implications. Calling women by first names in a setting in which men are referred to by formal, professional titles is a tacit acknowledgment that women are perceived as less important, even as their contributions are publicly recognized during grand rounds.

I’ve been practicing medicine for 40 years now and have long noticed women physicians are far more likely to be addressed by their first names, even by those who rank below them in the hierarchy. Of course the fact the majority of nurses continue to be women can be a bit confusing to patients who make assumptions. Yet this occurs constantly in spite of today’s large and obvious name badges and prominent labels on coats identifying women physicians. We cannot change patients’ attitudes much, although I gently correct them when they make this mistake. But we can change our own behavior. We can also give equal pay for equal work. It’s well documented women physicians make significantly less money than do men for doing the same thing.

There is another fascinating aspect to this issue. There is some research suggesting women physicians provide overall better care, possibly by being more likely to adhere to evidence-based medicine standards. Some observers have added to that explanation the higher likelihood of women physicians to work in a collaborative manner with the rest of the care team. The study examined 30 day hospital readmission and mortality rates for a large number of Medicare patients. The differences in patient outcomes between women and men physicians were significant and persisted across multiple disease categories. That’s pretty strong stuff.

The same issue of the New England Journal also provided a vignette of one of the most famous of women physicians, Dr. Helen Taussig. Dr. Taussig more or less invented the specialty of pediatric cardiology and her name remains attached (with second billing!) to a common pediatric cardiac surgical procedure, the Blaylock-Taussig shunt. The essay author wonders:

Since that time, how many Helen Taussigs have we lost to discrimination, harassment, and marginalization? And how many more will we lose if things don’t change?

Forty years ago I was fortunate to have been trained by 2 extremely gifted women who took different approaches to the obstacles they faced. Both possessed  spines of steel and they needed them. My fellowship mentor overcame first polio and then the grinding annoyance of belittlement at an extremely stodgy medical center, one actually renowned for its male stodginess. Her progression to full professor was inordinately delayed. She was often assumed to be some sort of social worker. Because she covered several clinical services it was her habit to wear her various pagers on a cord around her neck. Incredibly, I met one physician who assumed she was “some kind of beeper repair lady.” She was a perpetual winner in the resident polls for teacher of the year; the department chair finally told the residents they had to select someone else for a change. And, of course, her patients adored her. The higher-ups . . .  not so much, as the kids say today. She was known to seek them out in their comfortable lairs and make them less comfortable by confronting them in her calm yet firm way. Another of my mentors took a quite different approach. She was one of the giants of pediatrics and was among the founders of neonatology. No one messed with her because she met sexism head on, wielding a figurative 2 by 4 that she used to whack, among others, the chief of surgery on occasion. When necessary she could swear like a sailor. Tough doesn’t even begin to describe her. She succeeded and thousands of premature babies benefited.

These women took very different strategies dealing with sexism. And, as was said of Senator Elizabeth Warren, they persisted. But the thing is, it need not have been that way. That’s the point.