Has the anti-vaccine movement had any effect on recent vaccination rates?

Vaccines have been hailed by virtually all medical experts, as well as medical historians, as the among the greatest triumphs of public health to occur in the past two centuries. Yet since Jenner first proposed vaccination for smallpox using the vaccinia, or cowpox, virus there have been both skeptics of its effectiveness and people who thought it was dangerous. That is, they had the risk/benefit ratio of vaccination exactly backwards, believing risk high and benefit low. They also often ridiculed the entire procedure, even from the beginning, as this 18th century cartoon shows — Jenner is the fat gent kneeling by the cow. 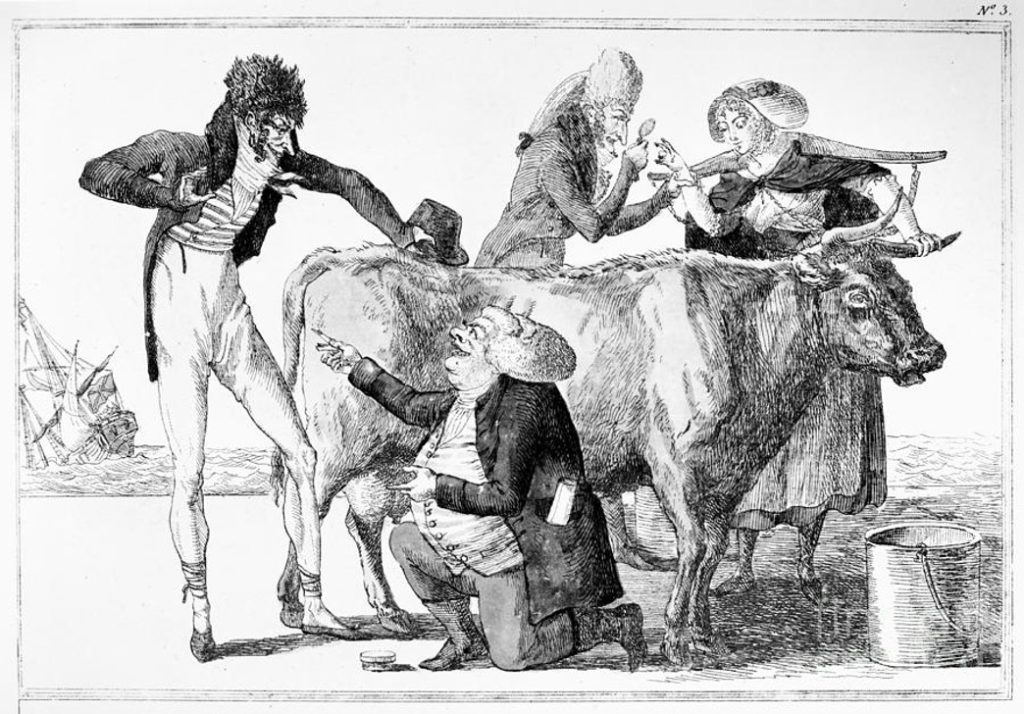 Against this constant background of vaccine denial, things changed two decades ago when Andrew Wakefield published his now notorious claim of an association between the MMR (measles, mumps, and rubella) vaccine and autism. The claim has not only been soundly refuted in a large number of well-controlled population studies, but Wakefield himself has been stripped of his UK medical license for unethical and fraudulent practices related to his publication. The paper itself was retracted by the journal Lancet, an extraordinary thing. Wakefield left the UK and moved to Texas. But the damage had been done. Vaccine hesitancy increased, not just for MMR but for all vaccines. The rise of social media, particularly Facebook and Twitter, appears to have amplified the effect. But did it? We do know there is more anti-vaccine noise, but has this resulted in decreased uptake of vaccines? Most importantly, has this led to an increase in vaccine-preventable diseases?

Measles offers a good example to examine because, not only did it feature in Wakefield’s original claim, but measles is highly infectious with a high attack rate among susceptibles and the vaccine is highly protective. In the pre-vaccine era the attack rate for measles was at least 95% and most persons had had it by early adulthood. It is not a trivial illness; the death rate is around 1 per 1,000 cases and there is a substantial risk for complications and life-long disability. It does seem clear from epidemiological work that decreased vaccine prevalence has been linked to measles outbreaks in Europe and the USA. But are these isolated pockets in the population or part of a larger trend?

Before examining if these thankfully still isolated instances represent some broader trend it’s worth looking closer at vaccine denial. A key problem is that we don’t know if such denial is more common now than in the past or if today’s media environment has just made it noticeably noisier. This interesting study from the UK examines the profile of the typical vaccine denialist. Recurring themes found among surveys of such people is a belief in many conspiracy theories, suspicion of authority, and feelings of disillusionment and powerlessness. Particularly interesting to me was the first of these. In general, conspiracy theories are attempts to explain events as the secret acts of powerful, malevolent forces. For people who believe these things, particularly those who participate in social media, it is a simple, even natural thing to add vaccine denial to their stock of other conspiracy theories. There is also often a general animus toward mainstream medical practice in general.

So, to address my question in the title: What do we know about if vaccine denialism has affected overall vaccination rates in the USA? I’m pleased to note that recent reports from the CDC that at least cover the past five years indicate not much has changed. There are definitely pockets of low rates, and it’s interesting how measles seems to find those places where herd immunity has dropped sufficiently low to allow disease to break out. This is an abject lesson for all of us. The figures are compiled by the CDC from vaccination records from the individual states. Here is what they found about vaccine uptake for MMR, DTaP (diphtheria, tetanus, and pertussis), and varicella vaccines among children entering kindergarden.

During the 2016–17 school year, kindergarten vaccination coverage for MMR, DTaP, and varicella vaccine each approached 95%, and the median exemption rate among children attending kindergarten was 2%; these rates have been relatively consistent since the 2011–12 school year.

The legal principle that the state may compel vaccination to attend public school for the safety of other children was established over a century ago. All states allow some exceptions, although they vary in the specific categories allowed. The number of children who had some sort of exemption from vaccination has been steady, as the CDC notes. There are medical reasons for a child not to receive vaccines, but most of the exemptions are for religious or philosophical reasons as determined by the parents. California recently caused quite a stir among the vaccine denialist world by eliminating the philosophical exemption option if a child wanted to attend public school. They filed a spate of lawsuits against the state, all of which have been denied.

When I started reading about this subject I had been discouraged by the headlines from Europe and California. But the extensive CDC compilations remind us that, in spite of all the sturm und drang in social and other media, the overwhelming majority of Americans support vaccination.