What we know about pediatric deaths from influenza: 2010 to 2016

A recent article and accompanying commentary in the journal Pediatrics describe what we currently know about children who have died from influenza over the past decade or more. The Centers for Disease Control (CDC) has collected information about this since the 2003 – 2004 influenza season. In that first report there were 153 deaths. Since then there have been at least 100 influenza deaths annually among children. Several characteristics have not changed. About half of the deaths occur in children who were otherwise normal; that is, they had no underlying chronic condition that would predispose them to having more severe cases. Although the median age was 6 years, mortality was highest among the youngest children — those younger than 6 months. Most of the children who died, over 70%, had not been vaccinated against influenza. This is not a completely surprising finding since influenza vaccine is recommended for children 6 months or older. However, an important way to transmit the benefit of at least some immunity to infants and very young children is to vaccinate pregnant women since some protective antibody crosses over from mother to infant and lasts for several months at least. Currently only about a third of pregnant women are vaccinated.

Influenza is a stubborn and wily virus, traits that make designing a highly effective vaccine challenging. Its natural reservoir is several species of birds. It has 3 main subtypes, with the most serious disease typically coming from influenza A. The virus replicates itself in a way that results in frequent mutations, causing what is termed antigenic drift. This means the virus has the property of changing rapidly, making it something of a moving target for developing a vaccine against it. This is why our influenza vaccine changes every season in an effort to keep up with the rapid alterations. Immunity to last year’s version often doesn’t help much for this year. This also help explain why some years influenza is more mild, other years more deadly. There have been several severe pandemics from influenza when a particularly nasty version emerges, the most severe being in 1918-1919. That one killed over 50 million people.

These things make influenza vaccine one of our less effective vaccines. It reduces the incidence and severity of disease, but it cannot eliminate it outright, such as other vaccines directed against stable viruses like polio and smallpox can. Influenza is also notorious for paving the way for secondary infection from bacteria that happen to be resident in the respiratory system, such as staphylococci and streptococci. Many of the deaths are from such secondary infections. You can read much more about the details of the virus and its vaccine here and here. 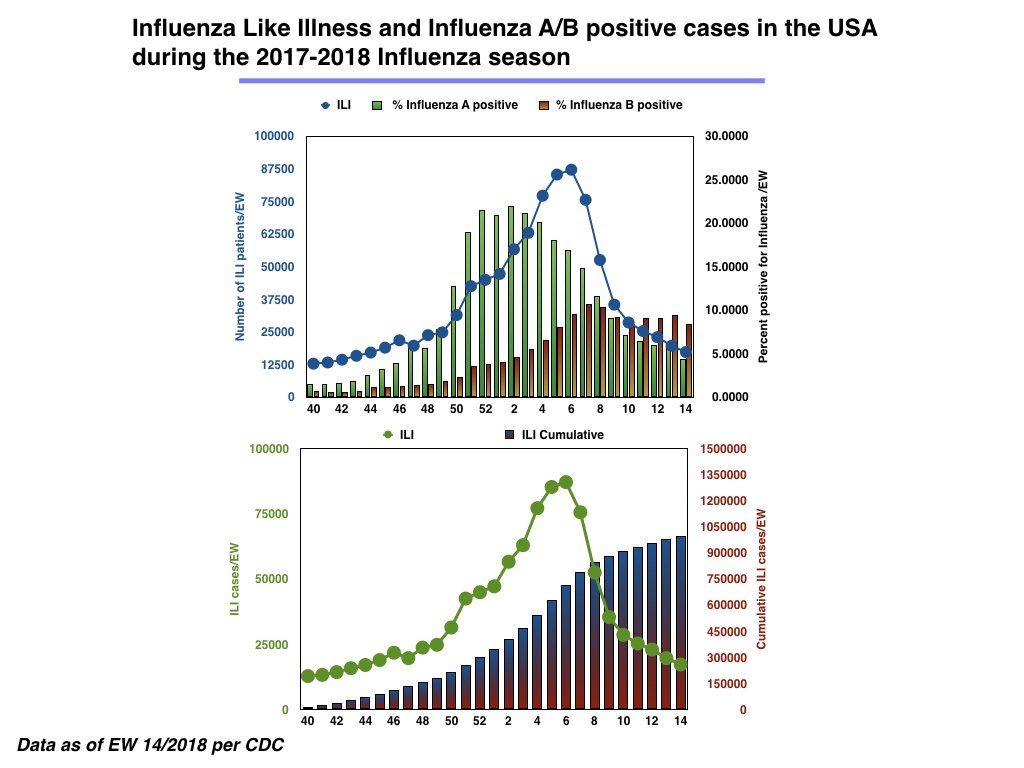 In the USA the influenza season runs from fall until early spring. The graph above shows the past season’s trends in both documented and presumed cases (“influenza like illness”). The horizontal axis shows week of the year. The vaccine is based upon the best guess of experts who survey viral trends around the world. Some years they guess better than other years. It usually is available in October. The current vaccine is a killed one, meaning that, whatever you have read on the internet, you cannot get the infection from the vaccine. Two doses are recommended for children who have not previously received it (specifics here). Like all pediatric experts, I highly recommend it. Health care workers such as me are required to get it. I agree with the author of the commentary cited above that our best approach for reducing the death rate in children too young to get the vaccine themselves is increasing the vaccination rate in pregnant women.