We’ve known for some time

the prevalence of obesity is growing among Americans — not just adults, but children, too. Obesity is associated with a long list of medical problems, including heart and other vascular diseases, diabetes, and joint problems. It is encouraging that recently the seemingly inexorable growth of pediatric obesity prevalence seems to have reached a plateau. But we still have a future problem looming for population health as these children grow up. A recent article in the New England Journal of Medicine evaluates a couple of key questions regarding obesity in children. The article, entitled “Simulation of Growth Trajectories of Childhood Obesity into Adulthood,” evaluates predictions of what will happen to our population health over the coming decades.

The authors used methods that are a bit complicated statistically and I’m certainly not competent to evaluate the details of them. But as I understand it they used existing data sets on childhood obesity to predict the prevalence of obesity at 35 years of age, the point at which the health risks of obesity begin to manifest themselves. Previous obesity studies had used fixed cohorts of individuals followed over time. The problem with that is that the dynamics of the population are changing, and presumably environmental risk factors as well. The model in this study allowed for new individuals to be constantly joining the cohort to control for these effects.

At any rate, the findings of this simulation were striking to me. Panel A below from the paper uses several models to indicate that by mid-century just over half of the population will be obese. Panel B follows a hypothetical cohort of 2-year-olds that essentially predicts the same thing. The authors defined obesity in the usual way: a body mass index (BMI) of greater than 30, with BMI defined as weight in kilograms divided by the square of height in meters. 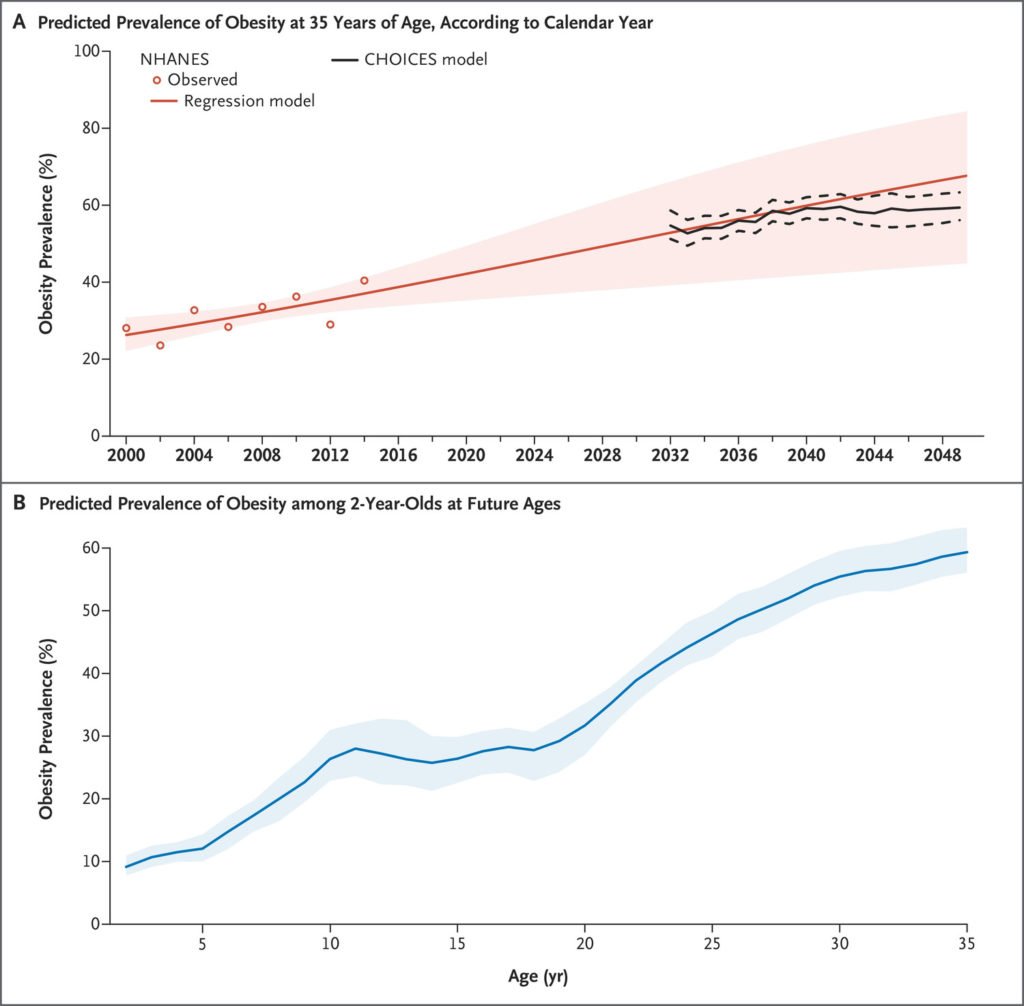 The authors’ overall conclusions are kind of a glass half-empty/half-full kind of thing for pediatricians. Their simulations indicate that around half of adult obesity is attributable to childhood obesity, and the rate of childhood obesity has been improving recently. That’s good and gives me hope for the future. Children who are not obese have a lower risk at being so at age 35, whereas those who are already obese in childhood have an extremely high risk of being obese at age 35. So as pediatricians we can have a huge effect on the problem of obesity in the adult population. In the authors’ words:

Although a broad range of public health and clinical efforts appear to have stabilized early childhood obesity rates, in this study we estimated that among children between the ages of 2 and 19 years in 2016, more than half (57.3%) will be obese by the age of 35 years. . . . about half of the total prevalence of obesity began in childhood, and adult-onset obesity by 35 years of age accounted for the rest.

It’s a sobering thought that over half of adults will be obese. There are various theories to explain this, but I think the common sense one is best: we eat more calories and our lives are progressively more sedentary. The processed foods many of us eat are extremely dense in calories compared to meals we used to eat. Some evidence has implicated the increasing use of high-fructose corn syrup in such foods. These changes in diet and lifestyle have occurred very rapidly and we have not adapted. Pediatricians can help in the needed adaptation because all obese adults started out as children.