Effect of the weightlessness of space on the brains of astronauts

This one isn’t about critical care or childhood illness but nonetheless I found it fascinating. Humans evolved with the constant force of the earth’s gravity. This is relevant to several of our organs, but the brain’s anatomy makes it especially important. The brain floats in spinal fluid encased inside the closed box of the skull. Gravity would be expected to affect the details of that. Indeed, studies of people who spent prolonged periods of time in bed in a head down position indicate this abnormal situation causes changes in the brain. The authors of this study examined what prolonged exposure to near zero gravity in space did to the brain. They used MRI imaging to study two cohorts of astronauts: those who experienced short space flights and those who spend many months in the space station. MRI is very good for things such as estimating brain volume and in particular studying the fluid in and around the brain. As a background, it has been known previously astronauts may experience some swelling of their optic nerves, with resultant visual disturbances, as well as elevated pressure inside the skull. The question was if these changes related to duration of time spent in space.

The data showed some significant differences. Astronauts in prolonged flights were more likely to have optic nerve swelling. Long flight subjects also had significant increases in the fluid volume inside their brains, as measure by ventricular size. The mechanism for that may be some obstruction of fluid flow from the center of the brain to the outer surface. There were several other differences noted in the article as well. Below is an MRI image showing one such difference, crowding of one of the brain sulci. The sulci are the fissures between the folds of the brain surface that allow the total surface area of the cortical part of the brain to be much larger than it would be otherwise. The importance of this is well shown by the problems experienced by children with the congenital condition lissencephaly, in which the brain is more smooth so cortical volume is much less. These are T2-weighted MRI images, in which fluid is shown as bright white. The images show the fluid down in the sulci, between the folds in the brain surface. 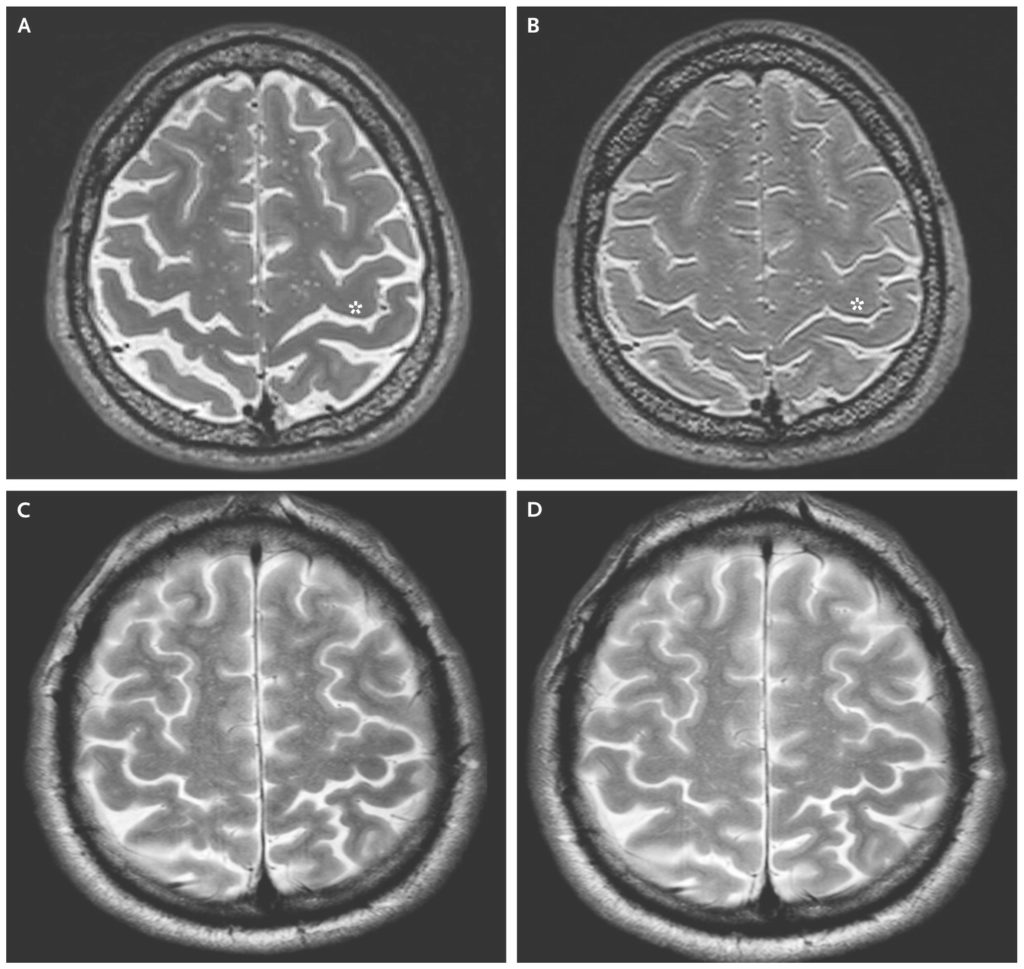 Images A and B show one astronaut before (A) and after (B) prolonged flight. Images C and D show a short flight astronaut before and after exposure to space. The white signal is fluid. If you look at the sulcus indicated by the asterisk in A and B you can easily see how the area is kind of squished down after prolonged flight. That particular astronaut also had visual disturbance symptoms. There is no difference in the before and after images of the short flight astronaut.

Besides being interesting I think this is important because it reminds us our bodies have evolved under a specific set of conditions, such as 21% oxygen concentration and the earth’s gravity. We have long known gravity is important to bone physiology because our bones rely on weight bearing to stay healthy. Now it appears the brain, too, often undergoes changes when exposed to zero gravity, changes which are physiologically important. Any planning for future space travel, say to Mars, needs to consider this and how to counteract detrimental changes. It is still unknown if these brain changes in the long flight astronauts persist for a long time once they return to earth; that is currently under study.