The vaccine deniers’ unicorn: their demand for comparison study of vaccinated and unvaccinated children 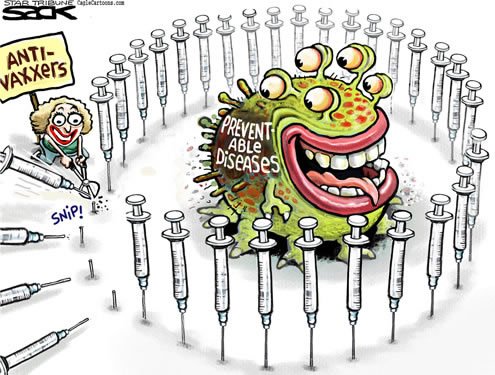 I swiped this editorial cartoon by Steve Sack from the redoubtable Dr. David Gorski’s blog, who goes by the nom-de-web of Orac. Recent epidemiology shows reducing the fraction of vaccinated children in the population rather promptly leads to a resurgence of the diseases vaccines protect against. This is the concept of community or herd immunity. Epidemiologists debate the concept around the margins but overall its importance is well accepted. People who deny the effectiveness of vaccines or even think vaccines are dangerous don’t accept it, though, and you can find many examples of this around the internet, some sort of reasoned, some not. Although I’m trained in pediatric infectious diseases, a field that includes a lot of epidemiology, I’m not an epidemiologist. So I’m not going to chew on the whole herd immunity thing. I’m going to write about a particular form of concern trolling common among vaccine denialists: the claim that they would fully support vaccines if only vaccines could be shown to be fully safe and effective, using their own special definitions of what that means. In effect they erect an impossible standard to meet, which is of course how concern trolling works.

A common claim is that, although individual vaccines may be safe, the safety of combinations of vaccines together has never been shown. It’s not always clear what the demand is here, but it often appears to me to mean they want a trial of all the many possible combinations of vaccines compared. If you just do the math on how many vaccine combinations are possible you can see this demand is absurdly impossible to meet. We actually do have ongoing surveillance of vaccine safety happening all the time and the results show them to be the safest medical procedure we have, with around 1 complication per million doses administered. The only thing safer is homeopathy, which does nothing but harms nothing. Vaccine denialists elide this fact by redefining what a vaccine complication is through including nearly anything that happens to a person afterwards, even years afterwards, as vaccine-caused. I’ve read posts by many adults who claim, for example, that their fatigue, difficulty concentrating, and “metabolic problems” stem from vaccines they received as children.

Also note this tweet includes the common fallacy the Amish don’t vaccinate — most do. Anyway, there have been some terrible studies of this sort reported, such as this one, which highlight the fallacy of doing such a simple comparison without controlling for any confounders. Fundamental to any proper study like this is that the two groups being compared, in this case vaccinated and unvaccinated, must differ only in the variable being tested. A common way of handling the question is a case-control study, in which each case is matched with one or more controls that, as best as can be determined, satisfy that requirement. But vaccinated and unvaccinated children, by parent choice, are hopelessly self-selected right out of the gate. There are other confounding issues, such as blinding, but that’s the main one.

Well then, as some have actually demanded, we must have a randomized controlled trial (RCT), the gold standard of clinical research. RCTs use random assignment of subjects to one group or the other, in this case vaccine or a placebo (fake vaccine), and ensure both the subjects and evaluation team be blinded to who got what. Think about this for a minute. They are demanding parents agree to subject their child to a trial in which they have a 50/50 chance of getting a fake vaccine. All this to satisfy the concerns of vaccine deniers. It would be incredibly unethical to do such a study, and no institutional review board (aka human studies committee) would ever approve such a thing. For such trials there must be reasonable uncertainty about which group is getting the better treatment and in this case there is none. The bottom line is any vaccine skeptic who demands proof like this is being massively disingenuous. It’s akin to demanding a randomized controlled trial of parachutes.

The enduring mystery in this perennial chestnut of a topic is that vaccine deniers demand a level of safety and certainty from vaccines that they demand from no other medical procedure or treatment. Absolutely every treatment I can think of is riskier than vaccination. Some are far, far riskier. I suppose it’s partly owing to a visceral resistance to injecting something into a healthy person, but vaccine denial in general has deep, deep historical roots.