Risk vs benefit: how medicine implements its prime directive 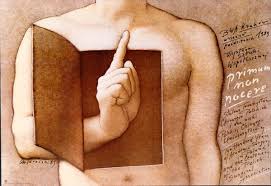 Anyone who knows anything about medicine seems to have heard the famous line primum non nocere. You could call it medicine’s Prime Directive (apologies to Star Trek fans). It’s Latin for “first, do no harm.” This simple concept is also one of the four basic principles of medical ethics, that of non-maleficence, the others being beneficence, autonomy, and justice. So we shouldn’t harm our patients. That seems simple, but working out exactly what it means in practice is complicated because often, in the short run, we do things to our patients that run the risk of considerable harm. The key calculus in sorting this out is considering the risk/benefit ratio of an action. We also need to consider the wishes of the patient (or the family for a child) because people vary greatly in their willingness to tolerate risk.

Of course risk tolerance is a sliding scale for most people. If a person has a life-threatening condition, say a leaking aortic aneurysm, the alternative to a high risk procedure to fix it is an even higher risk of death. On the other hand, if the condition itself is trivial and unlikely to cause serious harm, say a simple rash, the risk of treating it with high dose intravenous steroids is higher than the condition itself. An even more interesting example to me is vaccination. Here we have a situation in which we are giving a therapy to a healthy child, something we do for two reasons: to protect the child from future disease and to protect society from having a pool of unvaccinated persons who can harbor and transmit disease to others. The risk of vaccination is infinitesimally small, but it is not zero. Of course unvaccinated persons also have a tiny risk of contracting the disease, but that is not zero, either. My own view is the good of society trumps the question in this case, tipping it toward vaccination. But it reminds us to take questions of risk versus benefit, of primum non nocere, seriously.

As I’ve written before, people are quite illogical, even delusional, in how they regard risk, particularly medical risk. They particularly fear an extremely unlikely yet dramatic thing while tolerating the real possibility of a significantly bad thing without worry. Physicians make this worse at times. Have you ever signed a consent for a surgical procedure, even a minor one? The language is quite frightening, often including the possibility of death. It’s there even though the statistical probability of death could be similar, or even less, than that of a tornado striking the hospital during the procedure and wrecking the operating room.

The important principle to me in all this is to lay out the risk/benefit calculus when explaining what you’re proposing to do to patients. Tell people what the risk of doing something is weighed against the risk of not doing it. If it’s scan or x-ray of some sort, the risk is not having the information the scan will give or of finding some unexpected yet ultimately trivial thing that leads down a rabbit hole of more tests, the so-called incidentaloma (plus radiation for CT scans). In theory we’re supposed to do this all the time, and procedural consent forms even include that language, the risk of not doing the procedure, on them. But in my experience that doesn’t seem to get understood well. High risk procedures or tests demand a high risk of harm if they’re not done; after all, desperate times call for desperate measures. But everything we do, including the simplest of blood tests, carries risk. Make sure it’s worth it.