Do we have enough person power for the present and future needs of pediatric critical care practice?

Here are some background statistics. In 2017 nearly 36,000 new doctor applicants competed for about 32,000 resident positions in all specialties. For pediatrics, there were 2,738 first year residency slots spread among 204 different training programs. This is about 9% of the total positions available, a figure that has remained constant for some years. And, consistently, around 7-9% or so of graduating medical students choose pediatrics for their career. Since most first year residents go on to finish their residency that means we have around 2,500 new pediatricians completing training each year. How many of those choose to continue training in some subspecialty? In 2017 it was nearly 1,400, meaning around half of new pediatricians. The flip side is that half choose to practice primary general pediatrics, a much higher proportion than is the case for internal medicine.

Of the new pediatricians choosing to subspecialize, to train beyond general pediatrics in something like neonatology or cardiology, how are we doing in pediatric critical care? If you look at the results for the subspecialty match, you see critical care was tied with pediatric hematology for number three in popularity; neonatology is perennially number one, followed by pediatric emergency medicine at number two. In 2017, 188 pediatricians chose to continue their training to become pediatric intensivists. Nearly all of them matched to a training program. Here are the trends for the past 5 years: 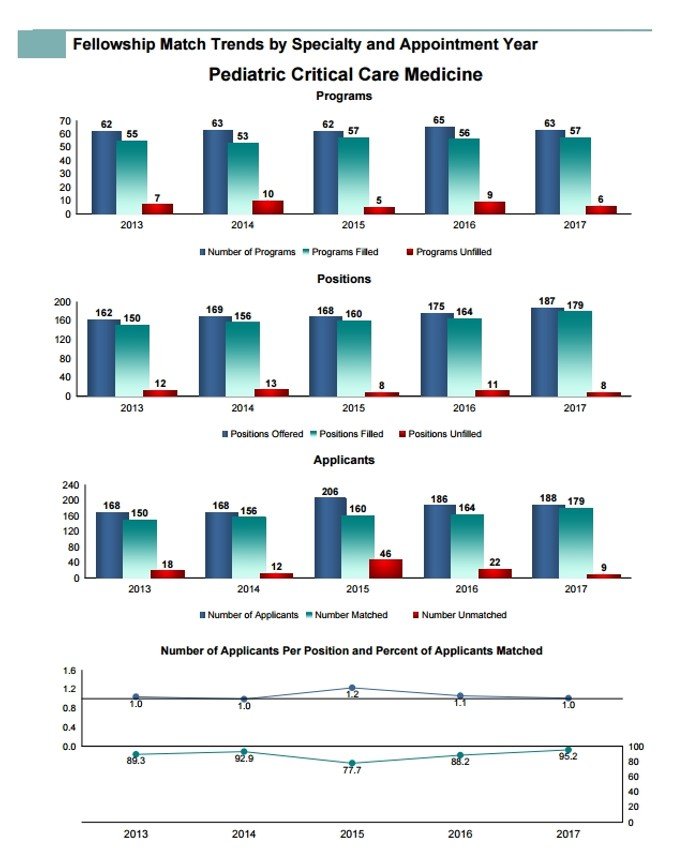 Note there hasn’t been much change, maybe 10% from year to year. So the popularity of pediatric critical care has been fairly constant. Most of these fellows finish their program, so roughly 175 or so new intensivists enter practice each year. A few of the graduates may choose to return to their home country if they are not US citizens; we don’t know how large that number is. We need to staff our current PICUs and replace those intensivists who leave practice. Do we have enough people?

The American Board of Pediatrics has been certifying pediatric intensivists since 1988, the official dawn of the formal subspecialty. As of 2015 the board has certified 2,377 intensivists over that entire time span. (My certificate is #163, making me an old coot in the specialty.) How many of these intensivists are still practicing, and how many PICUs do we have in the US that need their skills?

In 2015 American Board of Pediatrics published a detailed analysis of the workforce in pediatrics, including historical trends. Among other things, it showed the total number of pediatric subspecialty trainees in all fields had doubled over the past 15 years. Critical care, for example, has gone from 99 entering trainees in 2000 to the 179 noted above. How many of these 2,377 pediatric intensivists are still practicing in the US? A few clues help decide how many of my colleagues have left practice. We know that, by 2015, 399 of the 2,377 did not renew their certification, a pretty solid indicator they are no longer practicing. That’s a lot of people — 17% of the total. If we add back the 2016 finishing fellows we are left with around 2,200 practicing pediatric intensivists at most. The workforce data show something else: how old we are. Around half of currently practicing intensivists are in their prime career age of 35-50. A quarter of us are over age 55. I’m one of only 81 still practicing beyond age 65.

What about PICU numbers? There are just over 400 PICUs in the US at last count. They vary greatly in size from 4-6 beds at smaller community hospitals to 40 beds or more at the nation’s 200 dedicated children’s hospitals. There are around 4,000 PICU beds in total throughout the country. Now we need to match up intensivists with PICUs.

On average, there is one pediatric intensivist per 35,000 children in the US. This varies quite a bit state to state, from a maximum density of one per 17,000 in Vermont to one per 225,000 children in Montana. Wyoming doesn’t have any, but they don’t have any PICUs, either. So we have 400 PICUs to work with and about 2,200 intensivists to distribute them to. Right out of the gate that’s 5-6 intensivists per PICU. But large PICUs at academic medical centers have many more than that, often 8-10 at least. This is of course partly because these units are large. In addition, their intensivists typically have other duties such as teaching and research. My totally but I think educated guess is there are about 50 of these large units, potentially soaking up around 500 pediatric intensivists. This leaves maybe 1600 for the 350 remaining PICUs, or perhaps 4 intensivists for each one. All of this assumes everybody is working full time, which is not the case, and that the workforce is evenly distributed, which it isn’t. To me the numbers look pretty tight. My own anecdotal experience bears this out; hardly a month goes by, often more frequently than that, without somebody somewhere calling me and recruiting me. And they know I’m 65 years old so, although I have no plans to retire yet, I would just be a short-term fix for their staffing problem. Many of my colleagues around the country are working short-staffed and have been for years. Of course this overwork can contribute to burn-out and make the problem worse. My off the cuff estimate is that there are about 2 intensivist positions for every working intensivist.

So my bottom line is that we don’t have enough pediatric intensivists and, looking at the training statistics, we are unlikely to get significantly more. I don’t think the number of PICUs is too high; closing a bunch of them would be an unsatisfactory solution. The standard of pediatric care has advanced over the decades and every critically ill child deserves an appropriately skilled physician. I think the number of people we are training at best matches the number leaving practice. Occasionally I learn of new PICUs opening, but I think we currently have roughly the number we will have for the foreseeable future. Of course some may close owing to various reasons, primarily financial (PICUs generally lose money) or staffing-related.

So what should we do? I think we need to modify our staffing model. Some have advocated using advanced practice nurses, physician assistants, or other what are termed mid-level providers. This might help, if supervised by intensivists. This can work in large PICUs, particularly ones that have significant numbers of patients with the same types of problems, such as dedicated cardiac units. But smaller PICUs treat a wide variety of complicated issues, things not well suited to practice pathways and protocols often used by mid-level providers in other settings. All manner of things roll through the PICU door. So I don’t think that’s the answer. I think our future lies in the rapidly growing pediatric hospitalist movement, pediatricians who work exclusively in the hospital and can rapidly become fairly proficient in managing straightforward, less dire critical care issues if they have backup from pediatric intensivists if needed. For many smaller PICUs, a blended practice of intensivists and hospitalists can work; I know of several PICUs that use this model successfully. One thing seems clear: we never will have sufficient numbers of intensivists to care for all these children by ourselves.