The continuing controversies and debates over healthcare tend to conflate several overlapping terms: access to health insurance, access to healthcare, and actual health. The current Republican position appears to me to be that universal access to health insurance solves all problems. Of course if you don’t have money to pay for health insurance all the access in the world won’t help you, and the subsidies proposed in the Ryan bill fell far short of allowing millions of Americans to buy adequate health insurance. I emphasize adequate because a cheap policy that has large holes in coverage and caps on the total aren’t much help for many or most serious illnesses and injuries. The bare-bones, catastrophic policies also generally won’t cover mental health and addition treatment, the latter of which is a huge and growing problem. These sorts of policies were forbidden by the Affordable Care Act.

There is also the issue of easy access to healthcare. Someone without insurance does not have that because many, many physicians will not see patients without insurance. Those who insist emergency departments are required to see all patients, even the uninsured, and thereby provide access to care, are ignorant of what emergency departments are and how they work. Medicaid traditionally covered only children, pregnant women, and the disabled. A key part of the Medicaid expansion contained in the ACA extended the program to low income adults. That expansion, for states that took the offer from the federal government, should allow research concerning the true bottom line — actual health. In the long run, of course, keeping the population healthier is the best way to reduce societal healthcare costs. It turns out we already have some data about that question. An article in The New England Journal of Medicine 5 years ago gave us some information about that true bottom line. In the current climate it’s well worth reading the paper again.

The authors took advantage of a natural experiment in which some states — Arizona, Maine, and New York — expanded Medicaid in some fashion prior to when the ACA kicked in. The investigators compared an easily measurable statistic — death rates at the county level for ages 20-64. Neighboring states without Medicaid expansion provided the control numbers. These older expansions were not as generous as those later provided in the ACA, but they yielded some interesting numbers. Here’s a summary of what they found regarding death rates. The trends were statistically significant at the p < 0.01 level. 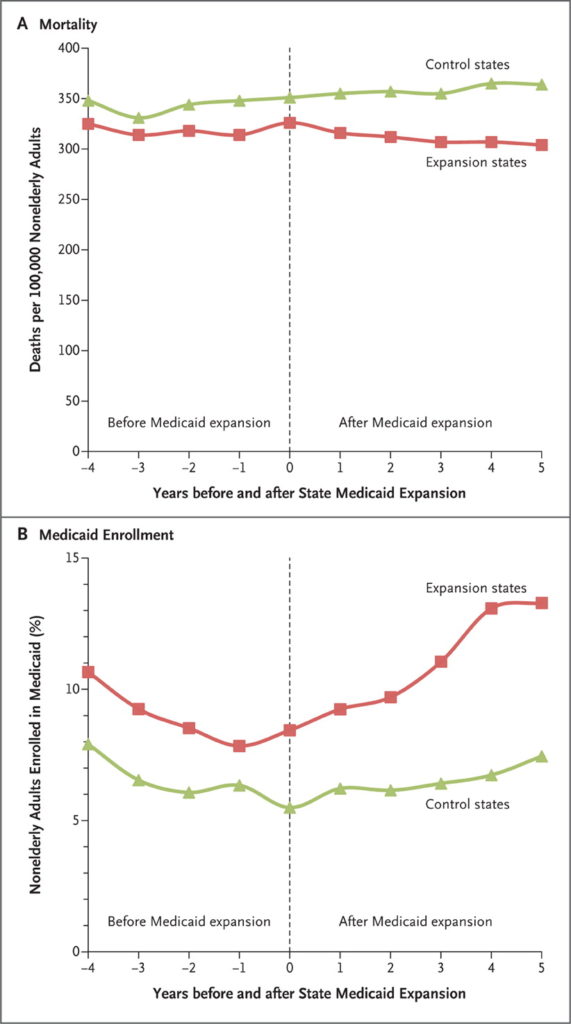 As we typically say, association does not prove causation, but these results are pretty striking and need more discussion and recognition. If you have good healthcare insurance, you can get access to healthcare and, it appears, ultimately have a lower risk of dying. Medicaid has its flaws — it’s not the best insurance there is — but it makes a difference. I think a healthier society is a happier society.