Suicide attempts among teenage girls are increasing. Do we know why?

Those of us who work in pediatric intensive care have frequent encounters with the problem of suicide and attempted suicide. It has seemed to me for some years that the numbers are increasing, and this has been shown to be the case. After years of declining, the suicide rate in our country has been increasing, now at about 125% of the rate of several decades ago. This increase accelerated after 2006. Although all age groups showed an increase, the rate among women, particularly adolescent girls, took a notable jump. In 2012 suicide was the second leading cause of death in adolescents aged 12 to 19 years, accounting for more deaths in this age group than cancer, heart disease, influenza, pneumonia, diabetes mellitus, human immunodeficiency virus, and stroke combined. Here are some recent statistics of women from the CDC (Centers for Disease Control), although they don’t quite break out adolescents they way I would like.

Actual suicide is just the tip of the iceberg, since, at least among adolescent girls who attempt it typically with drug overdose, there are as many as 90 attempts for every death. Since a large number of these attempts end up in the PICU I’m not surprised we are seeing more and more of them come through our doors. A few other points are worth noting here. The success statistics for adolescent boys are unfortunately much higher because boys tend to use more violent means than girls, such as hanging, firearms, or automobiles. However, although rates for boys are up slightly, they really haven’t changed much. It’s also important to realize suicide attempts are a spectrum — some are more serious than others. Many girls take an overdose and then immediately tell somebody about it. These are often called suicide gestures and can be quite impulsive. Some use the term “cry for help” to describe them. More ominous are children who carefully plan, such as by hoarding powerful drugs in secret and taking them in a setting where they won’t be found. They may leave a suicide note. I couldn’t find any data about whether these different categories are discordant in the rate increase, but I assume the two are tracking together. Finally, a child may not know which drugs are truly dangerous. I have seen very serious suicide attempts by children who take overdoses of what we know to be innocuous medications but the child does not. Regardless of what category the attempt is, of course, the child needs mental health services subsequently. These days we find a child’s text messages to be very helpful. So why the increase in adolescent girls?

Presumably suicide rates are rough and ready markers for rates of depression. Is teen depression increasing? A 2006 study says no, at least up until then. What about the last decade, since 2006 appears to be the year suicide rates inflected upward in adolescent girls. I did find a snapshot for 2015 from the CDC of the number of adolescents who experienced a major depressive episode during the year — girls were nearly 20%. 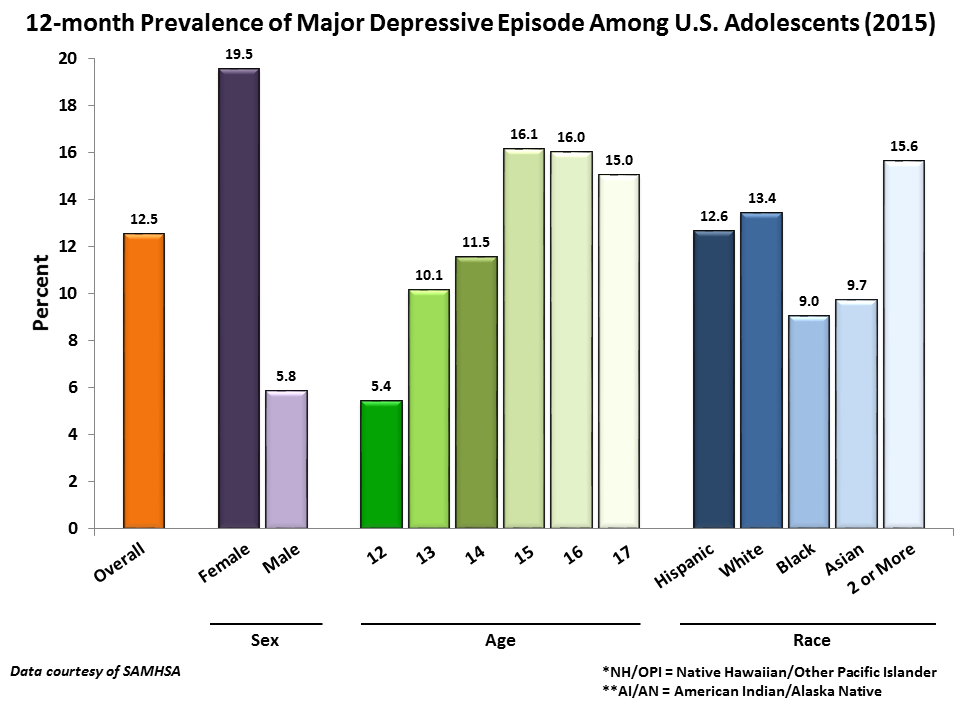 A recent study in Pediatrics, the journal of the American Academy of Pediatrics, found a nearly 50% increase in adolescent depression over the past 11 years. Mental health problems are notoriously difficult to study because of course we have no definitive test for them — no blood test, no fancy brain scans. We mostly rely on surveys. Still, it does seem something changed about a decade ago, and this is probably reflected in the increase in suicide attempts among girls at roughly the same rate as the increase of major depression.

There are a few other things to keep in mind. Prescriptions of anti-depressants have increased dramatically, particularly of drugs in the class we call selective serotonin re-uptake inhibitors (SSRIs). Common brand names for these are Prozac, Paxil, Celexa, and Zoloft. There has been concern that, in the short term after starting them, SSRIs may actually increase thoughts about suicide in adolescents. Another new development is social media. Teenagers, especially those in difficult home situations or who are socially isolated, are quite susceptible to bullying behavior, and cyberbullying has emerged as a new threat to such children. There have been several dramatic cases in the news about suicides following cyberbullying.

I’m sorry to say I really don’t know what explains these increasing rates, except to point out the overall rate of suicide for the whole population has also increased to some extent; it was 10.5 deaths per 100,000 persons in 1999 and is now 13 per 100,000. Middle-aged males have seen a dramatic jump in rates. It appears to me that, for many possible reasons, there is more social anxiety and depression in America, which in turn increases suicide rates. Adolescent girls are feeling this in particular. You might say our entire society is issuing a cry for help.