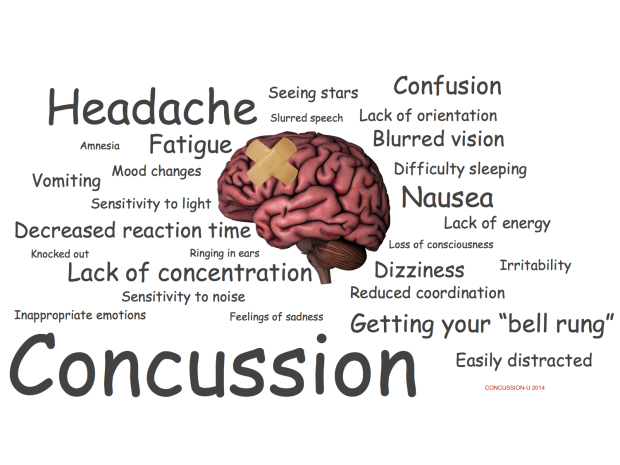 The following is from this recent study. It’s from Pediatrics,  official journal of the American Academy of Pediatrics. That’s a medical journal, but the introduction to the paper is so clearly written as to be understandable by anyone that I’m quoting it pretty much as written.

Approximately 1.6 to 3.8 million sport/recreation-related concussions (SRCs) occur annually in the United States. In 2007, there were 250 000 emergency departments visits for SRC, more than double the rate in 1997. Concussions result in symptoms (eg, headache, dizziness, nausea), impairment (eg, cognitive, vestibular, visual), academic and/or psychosocial problems, and recovery times ranging from days to months. Adolescents are at greatest risk for SRC and experience longer recovery than adult athletes due to maturation or other unknown etiology. Clinical guidelines recommend immediate removal from play if an athlete has a suspected SRC. These guidelines are based on . . . research indicating compromised neurometabolic function during the first 10 days’ postinjury that increases the risk of a subsequent SRC. These guidelines are also intended to reduce the risk of second impact syndrome, a rare but catastrophic condition that involves the loss of cerebrovascular autoregulation and brain herniation, and is often fatal among adolescent athletes who sustain brain injuries in short succession.

I’ve seen a death from second impact syndrome. The second head injury that produced it was a trivial tumble down 2 carpeted steps.

The Centers for Disease Control’s Heads Up concussion education program states, “It is better to miss one game than the whole season.” However, due to many factors, including the culture of sports (ie, play through injury), poor awareness of the signs and symptoms, and limited access to medical professionals, an estimated 50% to 70% of concussions go unreported/undetected. In fact, in 2013, the Institute of Medicine and National Research Council stated that the culture of sports negatively influences SRC reporting and that athletes, coaches, and parents do not fully acknowledge the risks of playing while injured.

There is immense social pressure to ignore the symptoms and keep playing.

Researchers suggest that exposure to physical activity immediately after concussion decreases neuroplasticity and cognitive performance and increases neuroinflammation. The physical exertion required for an athlete to remain in play after SRC may increase energy demand at a time when the brain is metabolically compromised and lead to similar outcomes reported in animal models. Axonal injury, astrocytic reactivity [two kinds of brain cells], and memory impairment are also exacerbated following a second injury 24 hours after an initial injury. The potential effects of continuing to play with an SRC have yet to be examined in adolescent and young adult athletes at risk for these adverse outcomes. The present study compared recovery time and related outcomes between athletes with an SRC who were immediately removed from play and athletes who continued to play with an SRC.

Understand this: a concussion, defined as a transient interruption in brain function, is brain damage. Just because we don’t yet have a specific scan or test to document the damage doesn’t mean it’s not there. The symptoms described above are proof enough. The good news is that the damage generally heals if allowed to do so. But if we don’t allow the brain to heal, repetitive injury leaves lasting damage. The recent recognition among professional football players of what is currently termed chronic traumatic encephalopathy is chilling evidence of what can happen. We don’t know what the lower threshold for causing this entity is — how much recurrent injury is required to produce it — but it has recently been identified in college football players.

So if your child suffers a concussion follow the rules, no matter what the coach or your overeager child wants. We’re talking about the brain here. This article well demonstrates that we’re not protecting our children well.