Should children ever play tackle football? 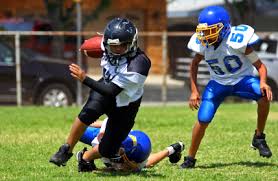 A recent editorial in the New England Journal of Medicine asked a good question: Is it acceptable for children to play tackle football? The background for this question is the emerging understanding that repeated blows to the head, even a helmeted head, can cause brain injury. That injury is cumulative over time. There has recently been a lot of media attention about this in the wake of well documented examples of professional football players suffering from an entity now called chronic traumatic encephalopathy (CTE). The disorder has actually been known about for a long time. Previously, however, it was believed mainly to be associated with boxers, who of course sustain many hundreds of blows to their exposed heads over the course of their careers. The presumption is that CTE results from the cumulative effects of a long string of concussions, even minor ones.

Although we now know professional football players are at risk for CTE, it is less clear where the risk begins — how many blows to the head it takes to put a person at risk. In other words, is there a safe threshold? Another key question is if a child’s brain has unique properties that affect risk. Some have said teaching “safe” tackling techniques will reduce the risk, but we have no information if this is true or not. We do have some recent data regarding the question of the effects in normal adolescent boys of playing football.

Investigators fitted special helmets on high school football players that collected data on all head impacts, whether or not the individual experienced an actual concussion. Key aspects of brain cellular microstructure were studied before, during, and after the end of the football season. The results are concerning. In the authors’ words:

Our findings add to a growing body of literature demonstrating that a single season of contact sports can result in brain changes regardless of clinical findings or concussion diagnosis.

Of course this is potentially a huge issue, since millions of children and adolescents play tackle football. Knowing what we know now, is this safe? Or, if not totally safe, is the risk for brain damage sufficiently tiny that parents who want their children to play football can realistically allow it? The American Academy of Pediatrics has issued a statement about it, but the recommendations waffle on the big question: it recommends more adult supervision, teaching of proper tackling techniques, and strength training, particularly of the neck muscles. (The article is also good because it reviews all of what we know about the question.) The editorial from the New England Journal is more blunt. It nearly, but not quite, comes down on the side of recommending tackling be eliminated. This reticence is understandable because it’s a potentially inflammatory opinion. Yet the editorialist makes some good points:

The AAP committee shied away from endorsing the elimination of tackling in youth football, because doing so would fundamentally change the way the game is played. Yet evidence indicates that tackle football in its current form is inconsistent with the AAP mission “to attain optimal physical, mental, and social health and well-being for all infants, children, adolescents and young adults.” Repetitive brain trauma can have serious short- and long-term consequences, including cognitive and attention deficits, headaches, mood disorders, sleep disturbances, and behavioral problems. To significantly reduce the incidence of brain trauma in young people, I believe that physicians should consider endorsing strategies that alter the way football is played.

My own view is that we know repetitive blows to the head, and certainly multiple concussions, are associated with permanent brain damage. We also know that the brain of a child or early adolescent takes longer to recover from a concussion than does that of an adult. We don’t know how many are safe, particularly how many severe ones. It appears even a single season of play causes changes in the brain, but we don’t know if these changes are transient or significant. But for these reasons I wouldn’t let my son play tackle football. That’s a personal decision. Other parents can make their own choices. I would not at all be surprised if we learn with further research that tackle football is unacceptably dangerous for children.