Is it time to retire the venerable physician’s white coat? 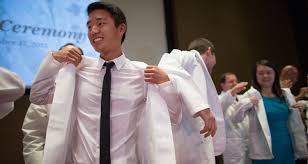 This has been a topic of discussion for years. The white coat has long been traditional garb for physicians. Medical schools often have some sort of ceremony in which students receive their coats, as shown in the picture above. Medical student coats are really short jackets — they get longer ones when they graduate. It’s a quick way of telling the students from the doctors. This emphasizes that, to a large degree, the white coat is a symbolic thing, part of the regalia of being a physician. It is interesting to me how, over the past several decades, this symbolism has been diluted a bit by lots of health care workers who are not physicians wearing long coats — everybody from dietitians to technicians who draw blood. But still, a long white coat with one’s name embroidered over the left chest pocket is still a standard marker for physicians.

I have to say that white coats can be handy. They have lots of pockets, for one thing, and these days physicians have to lug around a lot of stuff: papers, phones, pagers, badges, etc. It is nice to be able to answer a phone call and have the tools immediately available to scribble down messages and notes and then stuff these in a pocket.

It is also true that hospital dress codes have changed dramatically over the 30 plus years I have been in medicine. Nurses no longer wear starched white dresses, white hose, and caps. When I was in training we were forbidden to wear scrub (surgical) attire outside the operating room area; now everybody wears scrubs everywhere.

The problem is that articles of clothing can carry germs. Nobody wears the same shirt day after day, but many physicians wear the same white coat for days, even weeks. One study showed that most physicians change their coats only monthly at best. That can’t be a good thing. If you want to wear your coat you should at least have enough of them in your closet so you can get them cleaned frequently.

What do I do? Although my picture on the top of the page shows me in a white coat, I don’t wear them much these days. I work in several hospitals, one of which is a university hospital, and there I wear one out of tradition, I suppose. But I change it every other day or so. At the hospital where I spend most of my time I don’t wear one anymore. As a pediatrician, I also think white coats tend to scare kids, so that’s an added reason.