Cerebral palsy is an old term, and an imprecise one. It refers to a heterogenous group of lifelong movement disorders that derive from problems in the brain. Although it is generally related to the motor system, it is often accompanied by intellectual deficits, seizures, or sensory issues. It affects about 2 out of every 1,000 children.

Cerebral palsy has many causes, but for many years it was assumed that many, even most cases originate from things that happen around the time of birth, some sort of birth injury. I was taught that 40 years ago in medical school and pediatric residency. It was assumed that the most common injury was the result of interruption of oxygen delivery to the infant’s brain during labor or delivery, termed birth asphyxia. Several minutes of insufficient oxygen is well known to cause brain injury, both in this setting and in many other ones. This assumption is probably the principal reason for the invention and then the huge increase in invasive fetal monitoring over the past decades. The notion was that by closely watching the infant’s heart rate and other things during labor, potential problems could be identified. Once a baby in trouble was identified, a rapid delivery by emergency surgery, cesarian section, would rescue the baby before any damage could occur.

Not surprisingly, the increase in monitoring also led to a large increase in the proportion of babies delivered by cesarian. Better safe than sorry, ran the reasoning. There certainly are multiple conditions and situations when cesarian is life-saving, both to the infant and the mother. But most experts agree that we have overused cesarians and there have been recent initiatives to limit them to situations in which they are actually needed.

There is another thing to consider. If cerebral palsy is mostly related to injuries occurring during labor and delivery, then the dramatic increase in the proportion of babies delivered by cesarian should have reduced the number of children who develop the condition. A very useful recent study examines this question, and goes on to review what we know about the causes of cerebral palsy. It begins with this very instructive graph: 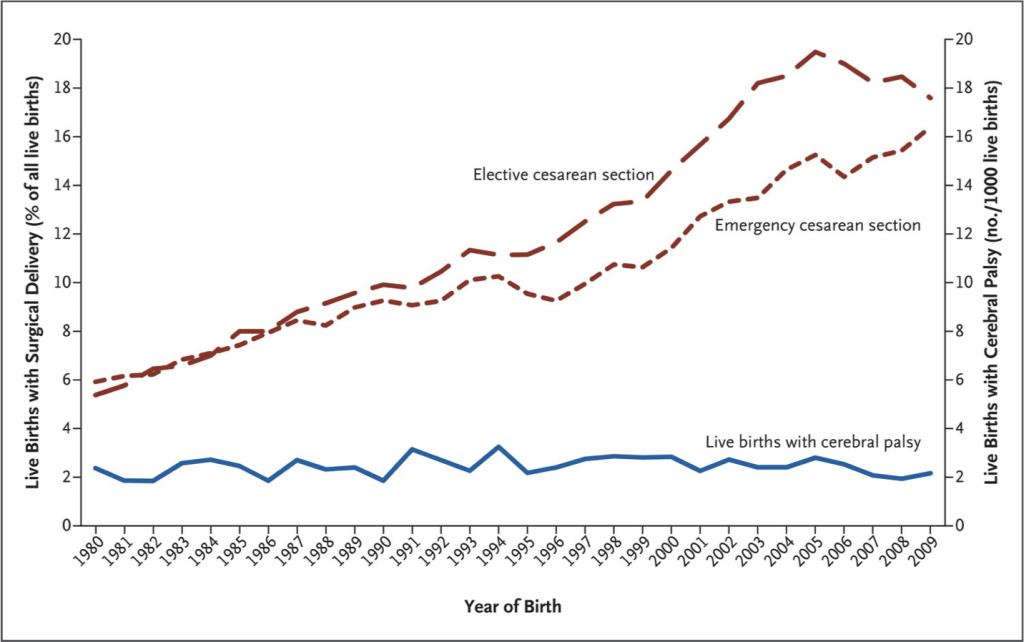 The author’s interpretation is succinct:

The increasing proportions of both elective and emergency Cesarian deliveries since 1980 have not been accompanied by any change in the proportion of live births with cerebral palsy.

So what is going on here? Why have we made no progress in reducing the number of children with cerebral palsy? In the remainder of the article the authors review what we know about causes of the disorder. They conclude that only a small minority of affected children suffer birth injury as a cause. For most, it is much more complicated.

The article reviews the many conditions we know are associated with cerebral palsy. A key observation is one we’ve known for many years: other birth defects, ones not affecting the brain, occur more frequently in children with cerebral palsy. Poor fetal growth is also correlated with it. There is also clearly a genetic component; children who have a sibling with cerebral palsy have a 10-fold higher risk of developing it themselves. Premature birth is a well-known risk factor, although this particular article is about babies born at term, on time.

The bottom line is that things are complicated, and the more we learn the more complex the entity we term cerebral palsy becomes. Although clearly children who experience severe birth asphyxia are at high risk, the majority of cases are not the result of birth injury. This conclusion has significant medical-legal implications, since obstetricians are frequently sued by families of affected children, even when the events around the time of birth were routine or nearly so. Fetal monitoring data are often pointed to, even though such data have never been shown to be predictive of cerebral palsy. The author’s final conclusion is apt:

In the past, assumptions about an asphyxial cause of cerebral palsy have led to an increase in surgical deliveries, harmed maternal services, and blinkered research. It is now evident that in advantaged countries, most cases of cerebral palsy in term or near-term neonates must have other explanations.

From my perspective it appears that the thing we call cerebral palsy is probably the final common pathway to how the fetal brain responds to a wide variety of stresses, most of which occur long before birth.