New recommendations for the treatment of bronchiolitis: we should do less because it doesn’t help

Every fall I write about bronchiolitis because it is one of the most common respiratory ailments affecting infants and children under about two years of age. It is the most common reason infants end up in the hospital during the winter and early spring months. Every year we get severe cases in the PICU. Pediatricians have struggled for decades to figure out how to treat bronchiolitis but we don’t have any specific therapies that work very well. (We have some promising treatments on the horizon, though, as I wrote about here.) Recognizing this, the American Academy of Pediatrics has significantly revised its recommendations of what we should and should not do for children with bronchiolitis. Before I describe these new recommendations, however, I should review what bronchiolitis is and why it can make small children, particularly infants, so sick.

Bronchiolitis is caused by a viral infection of the small airways, the bronchioles. By far the most common virus to do this is one we call respiratory syncytial virus, or RSV. To scientists, RSV is a fascinating virus with several unique properties. One of these is its behavior in the population. When it’s present, RSV is everywhere. Then it suddenly vanishes. There are exceptions to everything in medicine — I have seen sporadic cases during the off-months — but generally RSV arrives with a bang in mid-winter and then leaves suddenly in the spring. It’s the only virus that consistently and reliably causes an epidemic every year, although it often alternates more severe with milder visitations. RSV epidemics often have some regional variability. For example, often one city will have a much more severe epidemic than do others in other regions of the country.

Another aspect of RSV that interests medical scientists is how poor a job our immune systems do in fighting it off. Virtually all children are infected with RSV during the first few years of life. Not only that, all of us are reinfected multiple times during our lives. Attempts at devising a vaccine for RSV have all been unsuccessful. In fact, early versions of an experimental vaccine seemed to make the disease worse in some infants, raising the possibility that some aspect of our immune response to the virus actually contributes to the symptoms.

So what is bronchiolitis? What does it look like? In medical terminology, adding the ending “itis” to a word means that whatever comes before is inflamed. Thus tonsillitis is an inflammation of the tonsils and appendicitis means an inflamed appendix. So bronchiolitis is an inflammation of the bronchioles, the final part of the system of air-conducting tubes that connect the lungs with the outside world. Beyond the bronchioles are the aveoli, the grape-like clusters of air sacs where the business of the lungs — getting oxygen into our bodies and carbon dioxide out — takes place.

Bronchiolitis is a disorder of blocked small airways. This prevents air from getting in and out normally, primarily out.  The principal source of the blockage is that the bronchiole tubes are blocked from swelling of the walls and from debris caused by the RSV infection — bits of broken airway cells and mucous plugs. This picture shows what it looks like: 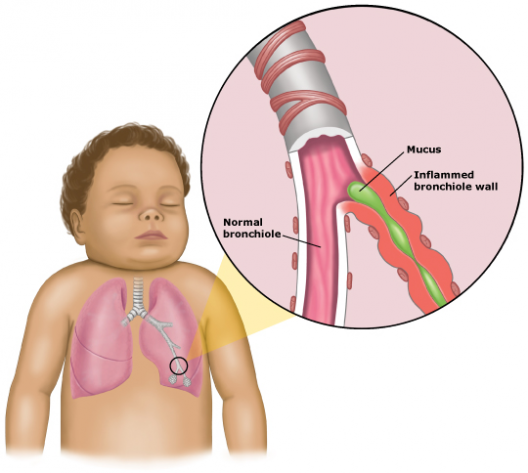 Infants are the ones who have the most trouble breathing with bronchiolitis. There are several reasons for this, but a key one is the construction of an infant’s chest. When small airways get blocked, we use our chest muscles — tightening them — to force air in and out of our lungs. We are helped in doing this by the fact that our lungs are encased in a fairly rigid rib cage; when we use our muscles to squeeze or expand our chest the system works like a bellows. Infants can’t do this well because the ribs across the entire front half of their chest are not yet solid bone — they are still soft cartilage.  So when a small infant tries to move air against anything that is restricting airflow, like clogged bronchioles, his chest tends to sink inwards, causing what we call retractions. These are easiest to see just below the last ribs. They especially have trouble forcing air out, so their chests become hyperexpanded with air, making it look as if their chests are puffed out a little. The other reason infants have so much trouble handling debris in their bronchioles is that these tubes are already much smaller to start with, so they get more easily clogged up than do the larger airways of older children.

How does a child with bronchiolitis look? Typically they are breathing faster than the normal respiratory rate of 25-35; often they are puffing along at 60-70 breaths per minute. They also will show those chest retractions and have a cough. Fever is uncommon. They may look a bit dusky from not having enough oxygen in the blood. They often have trouble feeding because they are breathing so fast. The fast breathing, along with the poor feeding, often makes them become dehydrated. Our breath is completely humidified, so when we breathe fast we lose more water.

What can we do to treat bronchiolitis? You read above that we have no specific medicine that will kill the virus. What we have to offer is what we call supportive care: treating the symptoms until the infection clears. Some of that supportive care has been based on how we treat asthma, another condition where air has trouble getting into and out of the lungs. Some years ago we learned that these asthma treatments, such as albuterol breathing treatments and steroids, helped very few children. Even though we knew that fact, a common thing was to try the asthma drugs and see if they helped an individual child, then continue them if it appeared they did.

One important point to make, especially for me as a pediatric intensivist, is that these recommendations only apply to children with milder disease. Some children with bronchiolitis become extremely ill and require help with their breathing, either with soft plastic prongs in their nose that deliver oxygen and air pressure or with a mechanical breathing machine. For those children we do what it takes to keep their blood oxygen levels in the safe range.

Old ways die hard, and it will be interesting to see if physicians follow these new recommendations. My guess is that, over time, we will. More and more we are learning that therapies that add risk and cost, without adding any benefit, are not the way to go.