Respiratory syncytial virus infection, aka RSV, is a common infection in children. A key aspect of RSV is how poor a job our immune systems do in fighting it off. Virtually all children are infected with RSV during the first few years of life. Not only that, all of us are reinfected multiple times during our lives. Attempts at devising a vaccine for RSV have all been unsuccessful. In fact, early versions of an experimental vaccine seemed to make the disease worse in some infants, raising the possibility that some aspect of our immune response to the virus actually contributes to the symptoms.

The most common form of RSV infection is called bronchiolitis. In medical terminology, adding the ending “itis” to a word means that whatever comes before is inflamed. Thus tonsillitis is an inflammation of the tonsils and appendicitis means an inflamed appendix. So bronchiolitis is an inflammation of the bronchioles, the final part of the system of air-conducting tubes that connect the lungs with the outside world. Beyond the bronchioles are the aveoli, the grape-like clusters of air sacs where the business of the lungs — getting oxygen into our bodies and carbon dioxide out — takes place.

Bronchiolitis is a disorder of blocked small airways. This prevents air from getting in and out normally, primarily out. In bronchiolitis, the main problem is that the bronchiole tubes are blocked from swelling of the walls and from debris caused by the RSV infection — bits of broken airway cells and mucous plugs. It looks like this, with the arrows showing air movement. 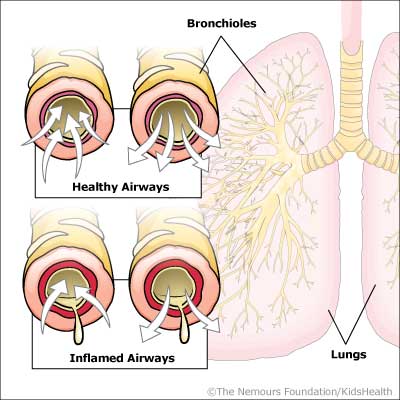 Infants are the ones who have the most trouble breathing with bronchiolitis. There are several reasons for this, but a key one is the construction of an infant’s chest. When small airways get blocked, we use our chest muscles — tightening them — to force air in and out of our lungs. We are helped in doing this by the fact that our lungs are encased in a fairly rigid rib cage; when we use our muscles to squeeze or expand our chest the system works like a bellows. Infants can’t do this well because the ribs across the entire front half of their chest are not yet solid bone — they are still soft cartilage.  So when a small infant tries to suck air in against anything that is restricting airflow, like clogged bronchioles, his chest tends to sink inwards, causing what we call retractions. These are easiest to see just below the last ribs. They also have trouble forcing air out, so their chests become hyperexpanded with air, making it look as if their chests are puffed out a little. The other reason infants have so much trouble handling debris in their bronchioles is that these tubes are already much smaller to start with, so they get more easily clogged up than do the larger airways of older children.

We have never had any specific treatment that works for RSV bronchiolitis. All we can do is what we call supportive care — oxygen, some breathing treatments (which usually don’t help much), IV fluids if the child is too sick to eat, and a few things we can do to help with mucus clearance. But now that may be changing. A recent study looked at a new drug to kill the RSV virus directly, something we’ve never had before.

The drug, which can be given orally, was tested on adults, not children — yet. The results were very encouraging. One of the issues with other anti-viral drugs has been that they only work well if they are given very early in the course of the illness or even before symptoms start. This new anti-RSV drug works even after people are sick with the virus. It greatly reduced the amount of virus in respiratory mucus, where we usually find the virus. Perhaps more importantly for sick infants, it also caused rapid improvement in symptoms.

Dr. Peter Wright, an RSV expert, is excited about the possibilities of the drug. Dr. Wright has worked on RSV for many, many years — so many that he was one of my teachers at Vanderbilt Hospital way back in 1978. I can recall that he does not get excited easily. I’m excited, too, because severe RSV bronchiolitis is a real scourge we see frequently in the PICU. Some infants even die from it. I was also pleased to read that Dr. Wright is still on the RSV case after all these years.