Sleep apnea in children: what do we know? 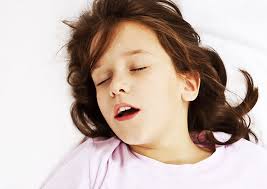 Earlier this year a child died following a surgical procedure in California for a condition called obstructive sleep apnea. The case generated a great deal of concern among parents about both this condition and the surgery often done to treat it. I wrote a post myself about it at the time. I still get questions about it because I care for quite a few children immediately after they have had surgery for it : What is it? How do we diagnose it? How do we treat it? Is surgery always necessary?

Technically the word apnea means cessation of breathing, but what we generally mean by it is a significant pause in breathing. Generally we define an apneic pause as lasting twenty seconds without taking a breath. Most of us can hold our breath that long without difficulty if we mean to, such as when we dive beneath the water. But that is when we are awake and in control of things. Things are different when we are asleep. A person with sleep apnea is unaware of their abnormal breathing pattern because they are asleep, although as you will read it’s often not very healthy sleep.

The condition is called obstructive sleep apnea because the problem is the result of obstruction of air flow. The obstruction happens at the level of what we call the upper airway — primarily the back of the throat. When we’re awake we keep good control of the tension in the muscles around our upper airway. But when we’re asleep the muscular tissues back there relax. They may sort of flop together and this can lead to obstruction. Think of the passageway as a pipe. If you look in the mirror and open your mouth wide you can see most of the key components. The tongue is at the bottom of the pipe and top is composed of the soft palette toward the front and the adenoids toward the back, although you can’t see the adenoids because they are tucked up behind the soft palette at the back of the nasal passages. The sides of the pipe at the narrowest point are the tonsils. Right at the back of the throat the pipe makes a right angle turn and dives downward, so the tissue sat the back of the throat are also important. Obstruction of air flow happens when any of those components bulge out into the pipe to make it significantly smaller.

There’s a principle of physics that comes into play here. It was originally described for fluid flow through a pipe, but it also applies to air flow. The principle is that, if other things are kept constant, flow is proportional to the fourth power of the radius of the pipe. That may sound esoteric, but it has real, practical implications for obstructive sleep apnea. It means that a relatively small reduction in the size of the opening has a huge impact on how much flows through it. So if you make the airway pipe half as wide you reduce flow by a factor of sixteen. People with obstructive sleep apnea have the size of their pipe sufficiently reduced when asleep to block air flow, and this leads to problems.

What are those problems? They stem from not getting enough oxygen into the lungs, not getting enough carbon dioxide out of the lungs, or a combination of both. This causes a reduction in oxygen and a build up of carbon dioxide in the blood, not a good thing. The brain recognizes things are not right and responds by not really going into a deep, normal sleep; the person frequently partially awakens so that more normal muscle tone returns, briefly enlarging the airway — at least until he falls back to sleep. The heart has to work harder than normal. The vessels of the lungs can be affected in a bad way.

What are the symptoms of sleep apnea? The most common is severe snoring, especially when the person is lying on his back. If you listen to someone with sleep apnea snoring you often hear a pattern of steadily worsening snoring, then a pause in breathing, then a sort of snort as they arouse, and then a repeat of the cycle. People with the condition are often drowsy during the day because they never really get a good night’s sleep. For children, poor school performance is common because of this. A headache in the morning is often common.

How common is obstructive sleep apnea in children? A reasonable estimate is that around 1% of children have symptoms of it at one time or another. It may be increasing because the problem is associated with being overweight and the prevalence of that among children is increasing.

How do we treat it? There are really two ways, both designed to keep the airway open when sleeping. A treatment often used in adults is  CPAP, which stands for continuous positive airway pressure. The idea is that if you place a tight-fitting mask over the mouth and/or the nose and blow air through it down into the lungs, the pressure will hold the airway open. It can be very effective. As you can imagine, however, many children will not tolerate wearing this apparatus because it can be uncomfortable and the CPAP machine is noisy. The second option is surgery to make the airway bigger. That usually means removing the tonsils and adenoids, although sometimes working on other parts of the airway, such as the soft palette, is part of the procedure.

If you are concerned that your child has sleep apnea — perhaps she snores loudly, you hear pauses in her breathing while asleep, and she is drowsy during the day — how can you be sure? After all, we don’t want to be doing surgery needlessly. It’s an important question and we have some good practice guidelines to go by. The American Academy of Pediatrics has published these. The most important principle is that we have specific tests we can do, tests incorporated into what we call a sleep study. This makes measurements of blood oxygen levels and measures airflow through the airway while the child sleeps. For many years the studies were difficult to do in children, but now many centers can do them. My own view is that, for most children, surgery should not be done without these studies to confirm the diagnosis. The exception would be if the diagnosis is clear (severe, obvious obstruction when asleep) or the child already has signs of stress on the heart and lungs.

How good is the surgery in children? Does it work? A recent research study helps to answer that question. For most children, surgery helped their sleep pattern significantly. The investigators didn’t demonstrate improvement in cognitive function during the day, such as school performance, but the time frame may have been too short to show that.

How dangerous is the surgery? The California case demonstrates that it, like any surgical procedure, is not without risk. There may be excessive bleeding afterwards, although we have ways to deal with that. Although this kind of surgery is often “same day,” meaning you can go home some hours afterwards, your child may need to stay in the hospital overnight. This is particularly likely if the sleep apnea was severe. The figures I’ve seen put the risk of death, the ultimate risk, at somewhere between 1 in 12,000 and 1 in 15,000. The death risk relates not only to the actual surgery but also to the anesthesia required to do it.