A new study on the safety of home births: are they as safe as hospital births? 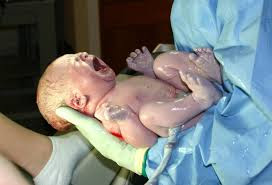 From time immemorial until about 75 years ago or so most babies were born at home. Now it’s around 1% in the USA, although it’s much higher than that in many Western European countries. The shift to hospital births paralleled the growth of hospitals, pediatrics, and obstetrics. With that shift there has been a perceived decrease in women’s autonomy over their healthcare decisions. There has also been an unsurprising jump in the proportion of Caesarian section deliveries, an operative procedure, and various other medical interventions in labor and delivery. So the debate over whether this is a good thing or a bad thing (or neither) is much more than a medical debate; it is also a social and political one. It is also to some extent an issue of medical power, a struggle between physician obstetricians who deliver babies in the hospital and nurse midwives who often deliver babies at home. I’m very interested in the social and political aspects, but as a pediatrician I’m particularly concerned with the safety question: Is it more dangerous for your baby to be born at home?

There have been many studies that attempt to answer that question. Many, even most, of them come from outside the USA. The results are mixed. Some say hospital birth is safest (this one, for example), others that there is no difference (this one, for example). One US study that found home delivery to be riskier has had its methodology heavily criticized. What we need are some well designed, large cohort studies from the USA, especially since healthcare systems differ substantially from country to country. I think this recent study from the American Journal of Obstetrics and Gynecology is very useful in that regard.

The main question the authors tried to answer was how the babies did. The measure they looked at was to analyze the frequency of two well-accepted markers of infant distress, things that correlate with trouble later in development. Bear in mind that there can be many reasons for these bad things to happen — some avoidable, some not. The notion is that if one can study a large enough group, then particular circumstances for individual births will wash out in the totals.

The potentially bad things that the authors chose were easy things to count and document. The first was a low Apgar score at 5 minutes after birth. The Apgar score, scaled 0 to 10 and recorded at 1 and 5 minutes after birth, has been a standard, well validated measure of infant distress for many decades. A value of less than 4 is potentially very bad for the baby. The other measure the authors chose was seizures, convulsions, immediately after birth. These can be caused by many things, but most of them are bad.

The study group consisted of over 2 million infants born in 2008. Of these only 12,000 were planned home births (0.6%). This shows how uniform hospital birth has become in the USA, but 12,000 is still a very large group of babies. They excluded babies born unexpectedly outside the hospital.

The results showed that babies born in the hospital, as you would expect, had a very much larger percentage of obstetrical interventions of various sorts associated with their birth. Regarding the distress measures, 0.24% of hospital-born babies had Apgars of less than 4 at 5 minutes; this compared with a rate of 0.37% for babies delivered at home — 1.5 fold higher. This difference was statistically significant. Also significantly different was the rate of seizures: for hospital-born babies it was 0.02% and for home-birth babies it was 0.06%, or 3-fold higher.

So what does this mean? First, the incidences of both of these bad things, although statistically higher in the home-birth group, were still very low. That is encouraging. But to understand things better you need to dig deeper into the data and see who attended at these deliveries. In the hospital it was presumably a physician, but what about at home? After all, “home delivery” can mean many things.

In this study, 26% of the home birth attendants were certified nurse-midwives, 51% were other midwives, and the remainder something else. A key finding to me is that the outcomes for babies delivered at home by certified nurse-midwives were no different than for those born in the hospital. So proper training matters — a lot. One key thing a trained midwife should offer is the knowledge of which pregnancies are higher risk and unsafe to deliver outside a hospital.

Both the American Academy of Pediatrics and the American College of Obstetricians and Gynecologists have issued policy statements about planned home births. The bottom line to me is that, while neither society is thrilled with the practice, both say properly selected (and they give lists of what that means, which is itself a bit controversial, such as if previous Caesarian section should be a disqualifier), low risk pregnancies can be safely delivered at home. As a pediatrician, I should point out that if you chose that there are some routine things that need to be done for your baby in the first days of life, such as a hearing screen. So you should bring your infant to the doctor promptly for a newborn evaluation.