Want your kids to watch less TV? Watch less yourself 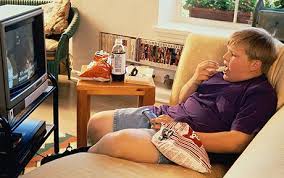 Most educators, and plenty of parents, think children these days spend too much time in front of a screen — computer screen, video game screen, or television screen. It is the last of these that has particularly interested physicians who care for children because increased TV time is associated with some health problems. For example, there is a correlation between time spent watching TV and the propensity to develop asthma. It’s not that TV causes asthma, but that children who spend hours each day watching it are more likely not to have less healthy lifestyles overall — like the kid in the picture.

Several things are associated with children spending more time in front of the tube. Not surprisingly, having a TV in a child’s bedroom is one. The American Academy of Pediatrics is particularly concerned about TV use in children under two years of age — here is their policy statement about that.

A new study, whose author one could easily call Captain Obvious, demonstrates that the highest correlation regarding how much TV a child watches is with how much his or her parents watch. Still, it’s helpful to have research confirm common sense.