Is it time to change how we train premedical and medical students?

Students wishing to go to medical school — premedical students — have gone through pretty much the same process for nearly a century. The requirements have some variability according to the whims of particular medical schools, but in general a person wishing to go to medical school needs a four year collage degree, during which he or she has completed two years of chemistry (including organic chemistry), a year of physics, a year of mathematics, and a year of biology. They also have to take a standardized test, the Medical College Admission Test (MCAT), which is intended to introduce some measure of comparability between what students from various colleges and universities know in common. (There are a few exception to this pathway: a few institutions have programs that combine undergraduate teaching and medical school training, producing a physician in six or seven, instead of eight years.)

Like premedical students, medical students have had pretty much the same training program for a century. Our current way of doing things dates back to the shakeup caused by the Flexner Report in 1910. This was a detailed survey of all American medical schools, and it showed how bad many of them were. As a result, many closed, and many others either merged with stronger schools or upgraded their teaching to what leaders of the time considered to be the gold standard: two years of basic science training followed by two years of practical, hands-on experience seeing patients. Although we have tinkered around the edges since then, little has fundamentally changed.

Here’s how things looked back then: 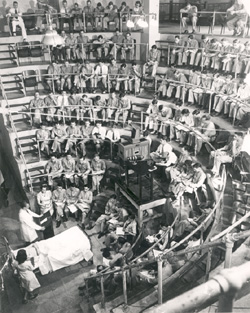 However, the world has changed. For one thing, medical science has exploded, yet we still train physicians for the same eight years we always have. Nobody wants to extend the duration of medical training; after all, with a typical residency added on after medical school it takes eleven years to produce a physician, often longer. 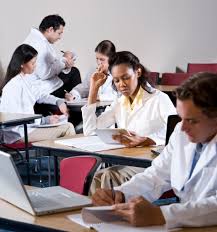 The heavily science-influenced training also raises another issue: GPA in science courses and MCAT scores predict well what a student’s academic performance will be in medical school (which is a bit tautological in itself), but they do not predict how good a physician he or she will be. Several medical schools have grappled with this by using what they term “holistic review” of prospective medical students, including objective measures (well, as objective as can be) of things like curiosity, interpersonal skills, empathy, and capacity for growth. An interesting recent article from Boston University School of Medicine assesses how successful these efforts have been.

The first, and to me unsurprising, result is that using this broader evaluation tool resulted in medical school classes that are more diverse in age, experience, race, and cultural background. Yet the average entering GPA and MCAT scores did not change, and student academic performance was just as high. Faculty at Boston University did note a couple of changes, though, including this key one:

The general sense of the faculty, particularly those who teach our small-group problem seminars, is that the students are more collegial, more supportive of one another, more engaged in the curriculum, and more open to new ideas and to perspectives different from their own. Some of these observations are subjective and difficult to quantify, but there is a striking, and uncoached, consensus among the experienced faculty members.

What about premedical training? What about the stereotypic hyper-competitive, obnoxious, fanatical premed, determined to get into medical school at any cost? Should we do something to change that culture? Or is it the best way to develop our future doctors? My own view is that these aspects of premedical training drive away many good students; they could be fine physicians, just lousy premeds. They never even consider the career. Another essay in the same issue of the New England Journal of Medicine describes Mount Sinai School of Medicine’s experience with that issue.

The Mount Sinai program, called Humanities and Medicine Program, provisionally admits, while still in college, students to medical school who are not premeds — they study whatever they want to. They don’t take the MCAT. They get their needed science background for medical training via a series of special summer boot camps. The most interesting thing to me is that for twenty-five years Mount Sinai has admitted half their class through the traditional pathway and half through the Humanities and Medicine Program: the academic performance, traditionally measured, of both groups in medical school has been the same. Here is what they have to say about its goals:

By eliminating MCAT use, outdated requirements, and “premed syndrome,” we aim to select students on the basis of a more holistic review of their accomplishments, seeking those who risk taking academically challenging courses; are more self-directed than traditional medical students; pursue more scientifically, clinically, and socially relevant courses; and pursue independent scholarship.

For myself, I applaud these efforts. Twenty years ago I spent four years on the admissions committee of Mayo Medical School, a highly selective medical school. I was discouraged over how committee members often mouthed the words of wanting more diverse, humanistic (whatever that means) students. But when it came time to vote on candidates, MCAT scores and GPA trumped all.

I also have a personal bias. I took the bare minimum of science courses in college, choosing a double major in history and religion. Even back then (1973) I was admitted to several medical schools. I never felt underprepared; you learn what you need to know when you need to know it. And I think that undergraduate experience made me a better doctor.