We may have finally bent the cost curve in medical inflation

Even people who do not follow the controversy about healthcare funding are aware of the fundamental root of the problem: inflation in healthcare costs has long exceeded inflation of everything else in the economy. This aggressive increase has reached the point where healthcare costs now consume about 16% of our entire gross domestic product (GDP). Although this trend has happened in other Western countries, it has nowhere else been as marked as here. We spend 50% more on health care than the next nearest European nation (Norway) and twice as much as most of Europe. (Nice graphics of this here.) Yet our health outcomes are no better. There is great disagreement about what the most important driver of our accelerating costs is, but everyone agrees that without some moderation in the rate our attempts at healthcare reform are doomed.

But we may have some breathing space that gives us time to figure out what to do about it — healthcare inflation has moderated in the past several years. A key point is that this moderation is not just because of our recent great recession, because it began over two years before the recession. An insightful perspectives article in a recent edition of the New England Journal of Medicine shows what is going on. The graph below illustrates the cost of healthcare which is in excess of what would be predicted if it matched the rest of the economy (zero means the same as the rest of the economy). If you look at the different colors, red, physician costs, have actually dropped below the rate for the rest of the economy. The blue bars show hospital costs, and they are the biggest chunk.

There is another way to look at this, which is to lump together various time periods as it relates to total personal health care costs. That also makes for an easier graph. 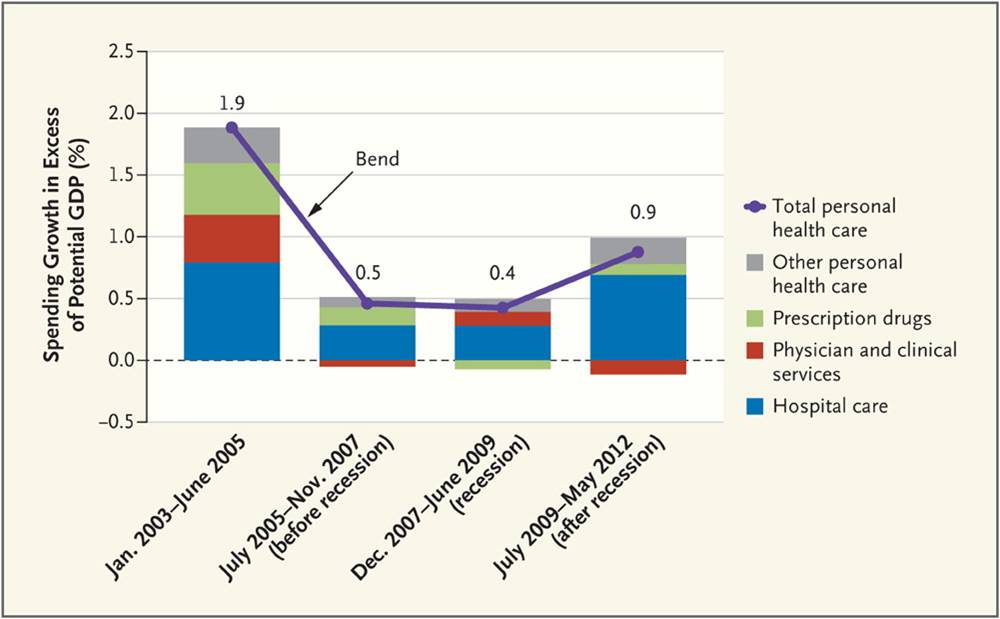 What you can see is that excess inflation in total personal healthcare costs during the past three years was half what it was during 2003-2005. Note, however, that the rate of increase has bumped up again, especially hospital costs.  Also note that physician costs are still negative, indicating that at least now physicians aren’t contributing to healthcare inflation.

What’s going on? If it wasn’t the recession that cause this encouraging trend, what was it, and how can we continue it? Healthcare wonks are trying to disentangle cyclical components, such as elevated unemployment rates, from structural components. The latter could include things like changes in physician and hospital practices. The authors are hopeful that many of these positive influences will remain, no matter what happens to the rest of the economy:

Some increase in growth over the next few years is possible, but we expect that excess growth will remain, on average, significantly below 1% (excluding a one-time jump associated with the ACA coverage expansion). A repeat of the rapid growth seen at the end of the 1990s seems unlikely, thanks to ongoing structural changes in the health care system and our vastly different fiscal situation: the federal budget surplus in the late 1990s reduced the pressure on the government to constrain health care spending; no such surplus is on the horizon today. Moreover, in an era of increased price transparency, the private sector is not likely to ratify substantial cost shifting.

I hope they’re correct, because the path we were on was unsustainable.