Be careful using the internet to get medical information: or, how medicine is as much art as science 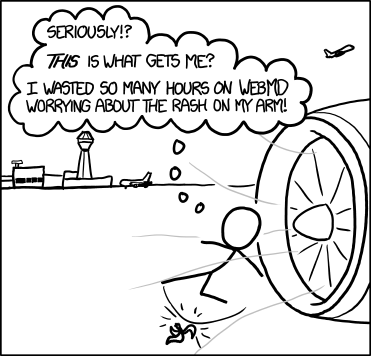 There is no doubt to me that the internet has been enormously beneficial in helping people understand health and disease issues. After all, that’s what I’m doing right now and have done for five years now. I always encourage parents of my patients to search the web as much as they like. But afterwards I like to sit down with them and help interpret what they’ve found.

There are a several problems with internet medical information. One is the sheer volume of it; as they say, it’s like drinking from a fire hose. Another problem is that a nontrivial portion of the information is misleading or just wrong. There’s really no way a nonphysician  can protect themselves against that other than checking into the credentials of who is giving the information. Google certainly doesn’t; they just care about page rank and key words. That’s why I put my biographical information on this site, so those of you interested can check me out. Reputable children’s hospitals and similar institutions can be trusted to put reliable information on their sites, but some random guy ranting, even if he is a physician, should raise alarm flags. A third problem is that raw medical information often takes interpretation filtered through the lens a medical education brings.  If you were wondering about your child’s cough, and Ii you were to read a chapter in one of the textbooks of pediatric critical care medicine sitting above me on my shelf about breathing problems, you would probably be scared to death over the possible things that could be wrong.

All of which is why the cartoon above gives a useful reminder: medical information on the internet can be a source of confusion as much as illumination. The situation gets worse when we are thinking about our own or our children’s health. Here is an interesting research study about that particular problem.

Research suggests that people tend to overestimate their own risk for serious ailments, in a way that they wouldn’t do if they were thinking about someone else’s symptoms.

I think the social media revolution that is sweeping up medical care, along with much else, is overall a good thing. The internet has empowered patients and their families tremendously. But be careful out there with those fingers on your searching keyboard. Medicine is still a mishmash of equal parts scientific knowledge, informed weighing of probabilities, and blind luck.  Computers will never replace all of that, at least in our lifetimes.