Increasing age in the father is associated with genetic mutations: new insights

A recent article in the prestigious science journal Nature has generated much interest. Its subject is an investigation into the rates of gene mutations in a series of Icelandic families. The authors evaluated multiple generations of families for spontaneous mutations in their DNA. It is these random, sporadic mutations that are the stuff of evolution, of how our shared human genome changes over the millennia. But even though such mutations are important for evolution to occur, most of them are bad, so a child inheriting them from a parent is more likely to be harmed than helped.

The researchers in this paper investigated the relationship of the father’s age to the risk of passing on a mutated gene to his child. They were particularly interested in the the well-known increased risk among older men of fathering children with two mental disorders — schizophrenia and autism — although the paper did not address these diseases directly. Both of these disorders show clustering in families, suggesting some genetic component to their cause. (It’s important to realize that genes are not destiny, and there are many examples in medicine of environmental triggers acting on a genetic susceptibility, so both are important much of time.) The researchers were asking the question if older men are more likely to pass on mutated genes to their children. It turns out they are. This is shown in a graph from the article: 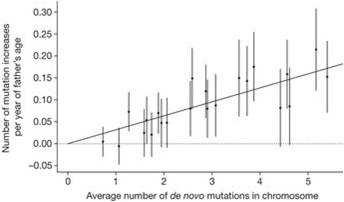 The graph shows that older fathers are progressively more likely as they age to pass on mutated genes to their children. What could a finding like this mean for us humans, as a species? The authors point out that an increased mutation rate could have serious repercussions for our species over the next centuries and beyond.

All of this might seem esoteric and uninteresting to anybody except the scientists working in the field. But the research generated a lot of buzz, including the New Yorker article I linked above. Some evolutionary biologists are concerned about what this means regarding the future fitness of the human species.

For sociological and environmental reasons, men are living longer and having children when they’re older. That, combined with the fact that we’re living in an era of diminished pressure from natural selection, means that Stefansson and his colleagues may have identified the single biggest factor in the ongoing development of the human genome: new mutations caused by old sperm. Mutations can be beneficial, but they are much more likely to be harmful—which means the changes will be overwhelmingly negative.

I find this fascinating. Besides genetics, this kind of information will help us understand better the organ that most makes us human — our brains.