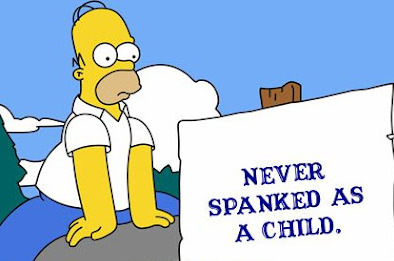 As all of us know, there is a long, long tradition in our culture of disciplining or punishing children using physical means. “Spare the rod and spoil the child,” as the old saying goes.  That explicit wording, by the way, does not come from the Bible, as most people think. Rather, it comes from a seventeenth century satirical poem by Samuel Butler. Still, The belief that punishment requires some element of discomfort, even pain, to be effective is an old one in our culture, one with deep historical and Biblical roots. For example:

“Foolishness is bound in the heart of a child; but the rod of correction shall drive it far from him.” (Proverbs 22:15)

“He that spareth his rod hateth his son: but he that loveth him chasteneth him betimes.” (Proverbs 13:24)

Neither of these examples talk about beating children, but the implication is pretty clear. Corporal punishment — beating with a switch — was also standard in classrooms, as any reader of nineteenth century literature will know. Severe corporal punishment disappeared from public schools a century ago, although a rap on the knuckles with a ruler was still common when I was in primary school in the 1950s and my friends who went to parochial school sometimes got a bit more than that. But over the last few decades this has gone away, so much so that it is now frowned upon, or even forbidden, for teachers to touch students in any way.

Pediatricians have also been telling parents for many years that spanking, for example, is not a good way to discipline children. The American Academy of Pediatrics guidelines on disciplining children, says this:

Spanking may relieve a parent’s frustration for the moment and extinguish the undesirable behavior for a brief time. But it is the least effective way to dis­cipline. It is harmful emotionally to both parent and child. Not only can it re­sult in physical harm, but it teaches children that violence is an acceptable way to discipline or express anger. While stopping the behavior temporarily, it does not teach alternative behavior. It also interferes with the development of trust, a sense of security, and effective communication. (Spanking often be­comes the method of communication.) It also may cause emotional pain and resentment.

Some parents, though, believe physical punishment, judiciously administered of course, is an important parenting tool. They often point to how they were raised as justification for this approach. A key question in this is the long-term effects on the child of corporal punishment. Everyone agrees that clearly abusive measures are wrong — illegal, too. But what about less severe measures, such as spanking? What are the long-term effects, if any, of that practice? A recent study in Pediatrics, the journal of the American Academy of Pediatrics, gives us some information.

The title of the paper is “Physical punishment and mental disorders: results from a nationally representative US sample.” The authors used survey results of 34,653 adults over twenty years of age to look for any association between physical punishment and future mental disorders. Definitions are important in studies like this, of course, because physical punishment runs a gamut from grabbing all the way to frank child abuse. The surveyed adults were asked how often, as a child, they were “slapped or hit by your parents or any adult living in your house”? They removed from the sample respondents who described  hitting or spanking that left bruises or those who had clearly been abused in other ways; the idea was to study what our grandparents’ generation would have thought to be “ordinary” forms of physical punishment. So what were the results? To quote the authors:

Harsh physical punishment [even] in the absence of child maltreatment is associated with mood disorders, anxiety disorders, substance abuse/dependence, and personality disorders in a general population sample.

Leaving aside the moral dimensions of the issue, my practical take is that harsh physical punishment (which includes spanking) doesn’t work well in controlling a child’s bad behavior and not infrequently causes future harm. So why do it?