Decreased rates of ear infection diagnosis: one reason antibiotic prescribing is trending down

The rates of prescribing oral antibiotics in children have been declining steadily since the early 1990s. A principle reason for this is the increased awareness, both among doctors and the general public, of the problem of producing antibiotic-resistant bacteria. These superbugs are created when we expose the whole population of bacteria in our bodies, most of which are friendly and cause no disease, to antibiotics. The friendly ones get killed, the nasty ones can acquire resistance to antibiotics. This is not a good thing for the patient or for the rest of us. We don’t want critters like this loose: 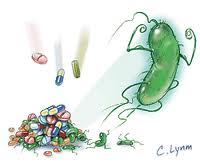 The best way to reduce this risk is to use antibiotics only when they’re really needed. A couple of decades ago it was common to give out antibiotics for upper respiratory infections that were clearly caused by viruses, which antibiotics have no effect against, “just in case.” Doing that subjects the patient to risk without benefit, something doctors should not do.

I think a change in public expectations has helped this trend, too. Patients once expected an antibiotic prescription for any respiratory ailment and were upset if they didn’t get one. Now most people are wiser, I think, especially if the doctor is willing to explain the situation. Of course that takes time. Doctors can be tempted just to give the prescription and get on to the next patient.

A recent article in Pediatrics, the journal of the American Academy of Pediatrics, adds an interesting new wrinkle to the issue. For pediatricians and family doctors, by far the most common reason for prescribing antibiotics is for middle ear infections, or otitis media. This article documents, at least in Massachusetts, a decline in the rate of diagnosis of ear infections. What is that about? Are ear infections really less common? I doubt it.

Examining the eardrums of an uncooperative toddler is a challenge, as most parents and all pediatricians and family doctors know. It can be really, really hard to get a good view of the eardrum in the couple of seconds you have to glimpse it. There is a huge temptation to glance at the ears of a toddler with a fever and pronounce that infection is present — parents accept it, even expect it, and it gives an excuse to prescribe an antibiotic. But not all cases of ear infection even need antibiotic therapy, and parents are increasingly likely to accept a watch-and-wait strategy for a day or so. Physicians are as susceptible to people’s expectations as anybody else, and I think part of the decline in ear infection diagnoses is a change in parent’s expectations of what needs to be done about them. (You can find a great review of diagnosis and treatment of ear infections here.)