What does “wheezing” mean, and what causes it?

I generally put up a variant of this post every year or so because the traffic analysis of this blog tells me that wheezing — what causes it and what we do about it — is one of the most common search terms that bring people here. It’s a common problem, and I’ve written some about it before. The fact that so many people are searching for information about it tells me that doctors may not be doing a great job in explaining what it is. This post will tell you what a doctor means by the word.

“Wheezing” is one of those words which, when commonly used by non-physicians means one thing (noisy breathing), but which means something else when doctors use it. So, when a doctor tells you your child is wheezing, what is she telling you? To understand that you need to know a little about the anatomy of the lungs.

The lungs are made up of two main components: tiny air sacs (called aveoli), where the business of getting oxygen into the blood stream happens, and the pipes that conduct the air down to the air sacs. This system of pipes begins with the largest of them – the windpipe (called the trachea) – in the throat. It ends with the tiniest of them – called the bronchioles – which are just before the air sacs. Think of the system as an immense tree: the trunk, branches, and twigs are the pipes, and the leaves are the air sacs. Here is a picture. 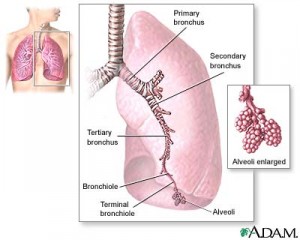 Wheezing is the noise that happens when the small airways have something blocking them. The blockage most commonly comes from constriction of the airways, but sometimes it may be from debris, such as mucus, obstructing the passage. The sound of air flowing past these choke points in the small airways makes a whistling sound – that is a wheeze. Most of the time it is a sound heard when a child breathes out, not in, because it’s more difficult to get air out than in so that’s when the problem is obvious.

We can hear wheezes with a stethoscope, but sometimes they are so obvious we don’t need one. A more subtle sign of wheezing is when a child takes more time to get air out with each breath than he does to breathe air in.

How do we treat wheezing? Since the most common cause is constriction of the small airways, we typically give inhaled medications to reverse the constriction.

Bottom line: when a doctor uses the word wheeze, we aren’t just describing noisy breathing. We mean a specific thing that has a specific treatment.